“Shut up or get out!”: UK speaker tells unruly lawmakers while PM leaving with “head held high”

Britain's House of Commons Speaker Lindsay Hoyle on Wednesday ordered two lawmakers belonging to the Scottish party Alba to leave the debating chamber just before “Prime Minister's Questions” on Wednesday for refusing to comply with his instructions.

The two members of Parliament shouted out as one of their Conservative counterparts stood to ask a question in the weekly “Prime Minister's Questions” session in Parliament's lower house.

Struggling to make himself heard above the loud talking by lawmakers, the visibly-angry Hoyle ordered them to leave the chamber.

"Neale Hanvey, I am now naming you and Kenny MacAskill to leave this chamber," Hoyle said, requesting them to be escorted out and warning that it might lead to them being suspended from the house.

British Prime Minister Boris Johnson was speaking in Parliament a week after he was forced to resign after losing the support of key government ministers and his lawmakers.

He said he will stand down once his Conservative party has chosen a new leader and he will leave with his “head held high.”

“Shut up or get out!”: UK speaker tells unruly lawmakers while PM leaving with “head held high” 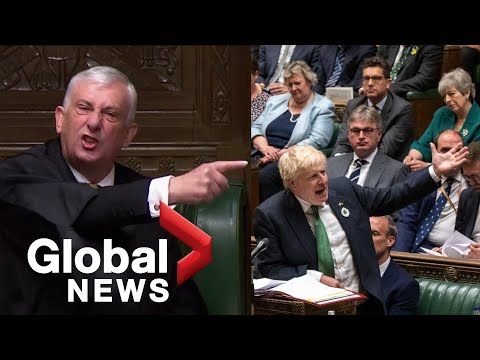