Walking tour of Montréal Olympic Park, the site of the 1976 Summer Olympics, with views of Olympic Stadium, Saputo Stadium (the current home of the Montréal CF MLS franchise), the and Montréal Biodome.

From Wikipedia:
The Olympic Park (French: Parc olympique) consists of a series of venues and sports arenas in Montreal, Quebec, Canada, which was home to many of the venues from the 1976 Summer Olympics.

It is bound by Sherbrooke Street to the north, Viau Street to the east, Pierre de Coubertin Avenue to the south, and Pie-IX Boulevard to the west.

Structures in the Olympic Park include:

The area west of Olympic Stadium, home to various outdoor events, is known as the Esplanade. Adjacent to the park across Sherbrooke Street is Maisonneuve Park, which contains the Montreal Botanical Garden (Olympic host of Athletics (20 km walk) and Modern pentathlon) and Montreal Insectarium.

In October 2017, an area in the park that was once referred to as "The Place des Vainqueurs" was renamed "Place Nadia Comaneci" in honour of the Romanian gymnast. 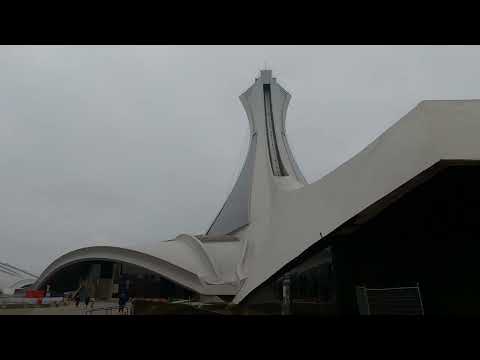