In this video, I look at the updated CarPlay stereo to the one I covered before - the A8 Pro from OUSMIN. This is an updated model called the OXc8 Pro. It features a number of improvements over its earlier model, namely its size.

The box it came in felt too thin for a Double-DIN car stereo. Technology has improved to a point that we no longer need such deep head units, and if you looked into some today, they would be 50% empty. So OUSMIN has decided to do away with the huge empty case and offer two plates that you attach to the sides of this rather thin car stereo.

You get everything you need in the box, minus the connecting harness for your vehicle type. Once you have that you can connect the two together with ease using the cables provided that are also clearly labelled, and the instruction booklet gives added insight into what cable does what.

If you opted for the optional review camera accessory, you will get that too. Sadly I couldn't test this, but the camera comes with plenty of cable length to install it to the rear of your car, and the rear camera can be altered in the stereo's onboard config menus.

Once fired up you're shown a standard menu on what is a rather low-end spec display. I found some mixed messages on Amazon as to this device's display specs, so I asked them. They confirmed this model features a TN capacitive touch-screen display, running a resolution of 800x480. Not quite the high resolution that's being advertised, and it shows.

The menu has a media playback panel, time and easy volume buttons (though the physical dial is way faster and easier to use). Along the bottom is a carousel of app icons for all the various functions of the A8 Pro.

Wired CarPlay and Android Auto fire up super fast. Initial boot time takes around 10-12 seconds into the system, which is fast, through a boot launch screen that can be customised to match your vehicle manufacturer.

Getting into Wireless CarPlay took around 10 seconds, so with the boot-up time, you're looking at just over 20 seconds into wireless CarPlay, and Android Auto takes just a little less than Apple's car platform.

Unfortunately, I couldn't get Android Auto to work on my Pixel 5 on Android 12. Wired was fine, but connecting to BT didn't fire up the option to go wireless. This was a shame.

What also was a shame was the rear female USB port, this failed to work. But I am sure it is due to the cabling needing to be grounded (or something). The front USB port also does wired CarPlay/Android Auto, so that was a relief.

USB media playback was decent, the screen was responsive, but its display quality was a little on the low-end, which mirrored the price range of this car stereo. So in summary, the A8 Pro, just like its previous model, is a decent entry-level car stereo, but don't go in expecting iPad-like display quality. Aside from this, you'll get a $199 small-ish stereo display, that's not that much bigger than your iPhone 13 (if you have one), and a decent sounding DSP powered system that packs a punch to your speakers. 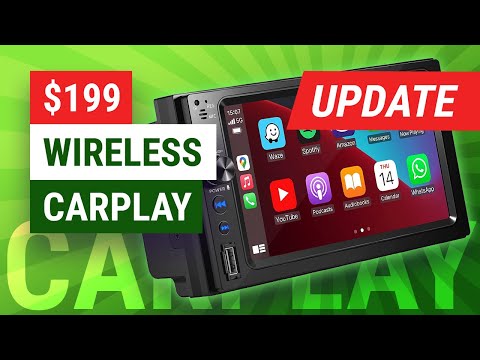