For the latest Genesis G90 pricing and information:
https://www.kbb.com/genesis/g90/

The Genesis G90 is all-new and we get to take a sneak peek at it.

The front fascia includes a new Crest Grille and the two-line headlamp and taillight design that extends across the entire brand. This signature makes it really easy to quickly recognize that it’s a Genesis. I love distinguishing features like this. These are thin and elegant.

All the sensors, reverse lights and license plate have been lowered in the rear to give it a more minimal appearance. It’s uncluttered and unfussy.

There’s something very architectural and at the same time athletic about the exterior of the G90 that just works. This is a beautiful sedan.

Inside makes you never want to get out of the car. And this is just as good in the back seat as the front if being chauffeured around is your thing.

Every material and finish on the interior just screams luxury. Or rather whispers it because screaming is not refined and not what one would do in here.

There are two panoramic sunroofs. One up front and one in the rear and each can be operated independently of the other. Same with the seats in the rear, both can recline independently. And you’ve got mood lamps back here, too.

This is the car to be driven around in, for sure.

However, if you chose to drive it yourself, you’ll be rewarded with a 3.5-liter turbo engine that makes 375 hp. The G90 gets multiple cooling systems to improve acceleration and responsiveness of the engine and brakes, for when you’re driver is doing those evasive driving maneuvers.

The G90 gets a new suspension system for a smoother ride that recognizes the conditions of a road using a camera and making adjustments before going over potholes. It also get a multi chamber air suspension that lowers at higher speeds or raises up on rougher roads to reduce damage and cut down on road vibrations. There’s a feature that automatically controls damping rates.

So, basically what Genesis is saying is that this should be a very, very comfortable ride while you’re sipping champagne and eating caviar after your trip on the yacht.

The G90 also gets a rear-wheel steering option? Which will make it easier to maneuver this land yacht in tight spots.

Laminated glass and an active noise control system that tailors the amount of sound-canceling according to which seat you’re in promises to make it super quiet in here.

Of course, you expect your luxury sedan to have a lot of cutting-edge tech features and the G90 doesn’t disappoint.

Smart key access that deploys the flush door handles and an easy-close door system that closes the door for you are super nice. And fingerprint authentication makes it easy to get into your car if you’ve lost your keys or you’re James Bond.

There’s a 10.2-inch rear touchscreen and controls in the armrest that allow passengers to control the HVAC system and other functions in the cabin.

It’s got something called the Virtual Venue, which recreates the ambiance of say the Boston Symphony Hall. Something called the Mood Curator can adjust ambient lighting, seat massage, and electric curtains to create different vibes in the car. And the 23-speaker Bang and Olufsen audio system surrounds you in sound.

Not to be outdone by the S-Class, the G90 now gets a fragrance system, too. Smells like money. But not too much money. The G90 starts at about $80,000, which when it comes to full-size luxury sedans is a bargain by comparison.

It gets a ton of active safety features that include adaptive cruise control with Hands-on Detection, parking collision avoidance assistance, and a remote parking assist if you just don’t want to do it yourself at all.

Very much looking forward to testing out all the new gizmos and gadgets and seeing how the G90 drives. Or maybe I’ll just sit in the back and have Danger or Micah chauffeur me around. 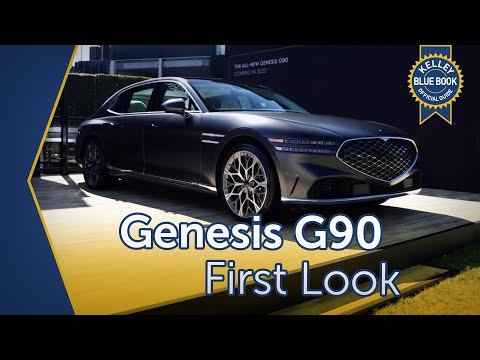 For the latest Genesis G90 pricing and information: https://www.kbb.com/genesis/g90/ The Genesis G90 is all-new and we get to take a sneak peek at it....