This is part of our new short video series for 594 Miles From Chicago, called "3 Questions with". Each artist we interview will have 3 questions to answer at the end of their interview! In this video we have Pierre Lacocque who joins us at Buddy Guy's Legends in Chicago, IL.

About Pierre Lacocque:
Pierre was born on October 13, 1952 in Israel of Christian-Belgian parenthood. However, shortly after his birth, Pierre’s family moved to Germany and France before going back to Belgium in 1957. By the age of 6, Pierre had already lived in three countries. A preview to his future musical career on the road. Pierre’s childhood in Brussels resonated with the intense and impassioned Scriptural upbringing of his father, a Protestant minister, now living in Chicago, who became a world famous Old Testament scholar.

The sound of the harmonica was first introduced to him when he lived in Alsace, France. His father was then a minister in a small village called Neuviller (1955-1957). As he experimented with the toy he often cried listening to its plaintive sounds. It was not until he came to Chicago in 1969, however, that he finally detected his destiny: playing the blues on the harmonica. He had never heard the blues saxophone-like amplified harmonica sound until then. In 1969 Pierre’s father received a full-time Old Testament professorship at the Chicago Theological Seminary, located on the University of Chicago’s campus. The family decided to move permanently to the Windy City and leave Belgium for good. Pierre was sixteen years old.

On a Saturday night in the early Fall of 1969, Pierre decided to go to a concert being held at the University of Chicago’s Ida Noyes. He had no exposure to Chicago Blues before then, and had no expectations as to what he was about to hear. As he listened to the band playing, he became overwhelmed with emotion and excitement at a sound he never heard before: A saxophone-sounding amplified harmonica! In his own words, “ I was absolutely stunned and in awe by the sounds I heard coming from that harmonica player and his amplifier. What he heard that night, the music, the mood, the style and sounds, moved his soul.

From that moment on, Blues music, and blues harmonica in particular, became an obsession. Two days later, on a Monday morning, Pierre bought himself his first harmonica (or “harp” as it is called in blues circles). Next he was buying records, instruction books, anything to do with the blues harp. He was talking to people, picking up new knowledge wherever he could. Obsession led to passion and intense dedication, and Pierre was practicing the harp six, seven hours a day, not paying attention to the clock (although he is known to check the clock now to remind him when he needs to get off the stage, because if it was up to him he would keep on playing beyond the scheduled sets!


Not having the ill-fated Canadian blues career anymore, Pierre, 24 at the time, and disillusioned, came back to Chicago. Although playing the blues on the harp could never be more fitting as it was at this point, it couldn’t pay the bills. And it was at this point (1976) that Pierre described his life as going “the intellectual route”. Pierre decided to further his education in Clinical Psychology. It was during this period that Pierre met his Social Worker wife Vickie, and began working as a clinician at a Mental Health center in the Pilsen neighborhood of Chicago. For the next decade, Pierre was involved with his psychological work and research, finishing a doctorate at Northwestern University and publishing professional articles and a book, until a major insight took place in 1988. Pierre, an accomplished 36 years-old man, who had been studying Existentialism, Theology, History of Religions, etc. began to feel a void in his life. He began to re-evaluate his life and look into his own heart. Eventually he heard the answer loud and clear: He missed playing the blues. The awareness struck him like a beautiful horn, coming from an amp, distinct and unique, and yet a sound he had heard before, hidden all these years, but definitely not lost. 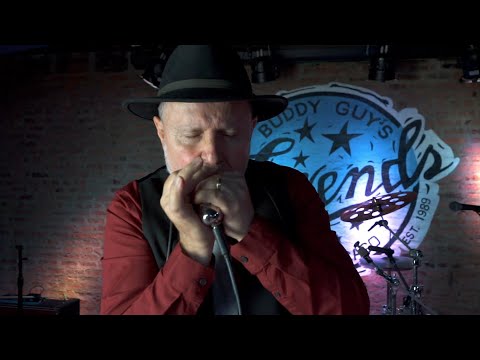 This is part of our new short video series for 594 Miles From Chicago, called "3 Questions with". Each artist we interview will have 3 quest...