On this week’s Academy Of Tone, Thomas prepares for the festive season and the beginning of 2023 with a cozy review of the year that has been 2022! He’s also joined by his friends and bandmates Rudi “Gulli” Spiller and Sabrina for some spontaneous musical performances featuring AMP1 and AMPX.

It’s been another unique year that has brought its own set of challenges and opportunities for everyone, and we can include BluGuitar and Thomas in that. But at the same time, 2022 was also a year when the world of live music and events seemed to open up again, so there were concerts, trade fairs and more to enjoy.

One of the major highlights of the year was the return of the NAMM Show in Anaheim, California, which was taking place for the first time since January 2020. As you’ll remember, we launched the latest status of AMPX at the show and had a hugely successful time over there meeting new and old friends, making business, and networking for the future. Thomas also played a few killer shows with some industry greats like Neil Turbin, Larry Mitchell and more, and we really ratcheted up excitement levels for AMPX… which will finally be there for real in 2023!

The other great show of the year was Guitar Summit in Mannheim, Germany, which took place in September. This was the first in-person Summit since 2019, and it was an incredible experience for Thomas and the team to meet so many excited and positive friends, fans and industry contacts over the days there. This was the German public’s first taste of AMPX, and we also had the small matter of a 1959 Gibson Les Paul being on the BluGuitar booth as well! It was an exciting time, and on the show, Thomas will share some photo and video highlights from both NAMM and Guitar Summit.

Away from the BluGuitar business, Thomas’s 2022 as an artist was busier than the previous two pandemic-spoiled years. There were tours and concerts aplenty, and he shared plenty of gigs with many different band members and artists, as well as doing dedicated tours with ben Granfelt – with whom he is also recording a double album, coming in 2023! Thomas will share some more highlights of these shows as well.

Finally, what would a review of 2022 be like without a preview of 2023? We all know you’re desperate for more news on AMPX, and Thomas will share the latest, as well as the other plans and goals for himself and BluGuitar. It’s going to be a fun show, so join us in the chat and share your own favorite experiences of 2022! Did you make new music this year? Did you see any great concerts, with Thomas or without, or buy any great new albums? What about the guitar gear you bought? And what are you looking forward to the most about 2023?! We’re looking forward to hearing all about it :)

P.S. This will be the last Academy Of Tone show for 2022: Thomas is gigging next Wednesday (December 28), so the show will return with a bumper episode on January 4 2023 featuring Thomas and Kai and LOADS of cool new stuff! So mark your diaries now… 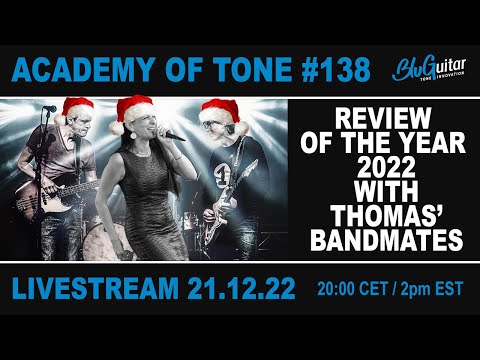 On this week’s Academy Of Tone, Thomas prepares for the festive season and the beginning of 2023 with a cozy review of the year that has been 2022! He...