Venom: Let There Be Carnage, is the 2021 sequel to the 2018 film, Venom. The first movie was received well at the box office but not quite so well by the film critics and although this second film didn't do quite so well as the first at the box office, it is widely considered to be one of those rare sequels that are actually better than the original film.

Like the music in this video? I made it!
Support me by getting it on any of these sites :P
Get it on iTunes: ► https://apple.co/2ENGfu9 ◄
Listen on Spotify: ► https://spoti.fi/3boTfCl ◄
Buy it on Amazon: ► https://amzn.to/2QVJZfk ◄

As with the first film, DNeg provided the majority of the VFX shots with Image Engine handling the "Carnage" shots and Framestore doing the animated for the Cletus back story.

Carnage:
There have been many different versions of Carnage over the years, in comic books, video games, and cartoons, every artist has portrayed him differently.
Using all these different versions as reference material and also researching fan sites, the VFX team analyzed what they needed Carnage to do in the film and from there, began to design: how he would look, how he would move, (and perhaps more importantly) why he would look and move that way.

Carnage is different to Venom, Carnage is Venom's offspring, a darker and more violent version of Venom whose bond with his host isn't one of mutual benefit (like Venom and Brock's symbiotic one) but it's self-serving and destructive.

With this in mind, the team decided that Carnage's tentacles would look and act more like umbilical cords, and the transformation from Cletus to Carnage was made to be like Carnage was dominating Cletus, breaking through their shared anatomy in a very violent way.

For the way that Carnage propagates and increases his biomass, the team decided that his symbiotic nature would make him want to imitate the structures around him and so they decided to research Lindenmayer Systems.

Lindenmayer Systems or L-Systems are a mathematical logic system for describing the growth of simple multicellular organisms, you can use L-Systems in architecture by encoding a simple set of rules applied repetitively you can create complex geometric structures from organic forms, you can see this technique best in the final cathedral sequence.

Venom.
Although 'A Priori' Venom may seem unchanged from the first film, he has actually undergone various changes and improvements.
His muscle system is completely different from the first film, it now uses a three-layer soft-tissue simulation (muscle, fat, and skin), Venoms shoulders are slightly smaller and his head is slightly larger, his facial rigging has also changed to allow for a more vocal role and to help capture some of the subtle nuances of Tom Hardy's vocal performance.
You may have noticed that Venom's voice is different in this film too.

Tom Hardy works by first rehearsing a scene, then he goes off to a quiet area and records audio of himself acting out Venom's part, then a sound guy plays that audio part back to Hardy through an earpiece in his ear.
This method allows Hardy to play "off" himself, interrupt Venom, or have the sound guy make venom interrupt him, this led to a more natural performance which both the sound team and the rigging and animation teams wanted to maintain.

Another improvement made was in the area of cloth simulations. When Venom or his tentacles emerge from Eddie Brock's body, the areas that could sell or break the shot were the points where Eddie's clothing meets Venom.
These two points couldn't just look like Venom was stuck onto Eddie, it had to look like Venom was emerging from Eddie, this process had to be photo-real and carried out over multiple costumes variants.


Cathedral.
The final fight sequence in San Francisco's Grace Cathedral was the hardest and most time-consuming and in fact, is responsible for nearly half of the film's VFX shots.

...
Read the full article at www.famefocus.com 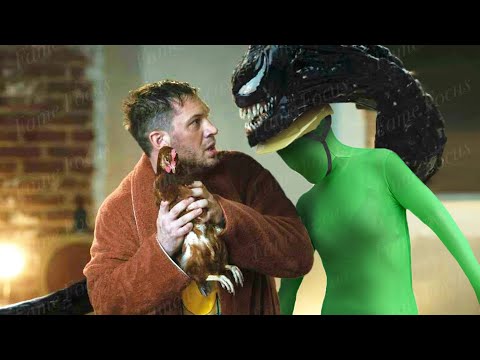 Venom: Let There Be Carnage, is the 2021 sequel to the 2018 film, Venom. The first movie was received well at the box office but not quite so well by ...