This is the AN/GRC-106A military transceiver. It consists of the RT-834/GRC receiver-exciter, followed by the AM-3349 RF power amplifier. The radio you see in the video is a very late model that is equipped with the 100 Hz synthesizer (earlier versions only could handle 1 kHz frequency increments).
The transceiver covers 2 MHz to 29.999.9 MHz in 100 Hz increments. There are no lockouts, it can cover any frequency in between these boundaries.
The radio is USB, AM. FSK and CW capable. Output power is around 500 watts peak. It runs of 28 V DC and will draw close to 40 amps at peak power.
The military used these transceivers mostly for data traffic (encrypted RTTY) in radio shelters, as well as armored vehicles and Jeeps. But the radio also is phone capable.
The radio is of modular construction, as you can see in the video. The quality of build is exceptional, just like any tactical military radio that was designed and built in the US.
The radio was designed in the mid-Sixties, and was used by the US military all the way into the Eighties after which it was replaced with frequency hopping capable HF radios. The radio is a hybrid; the RT-834 receiver/exciter uses two tubes in the RF front-end (RF and mixer), the rest is solid-state. Same for the AM-3349 power amplifier, there is one driver tube, which is followed by two 4CX250 ceramic power tubes in parallel. The rest is solid-state, including the RF pre-drivers and the control circuitry.
MHz band changes are done with a motor drive system, that drives a turret containing individual coil elements for each MHz segment. Both the receiver/exciter as well as the power amplifier have such a turret. See the video for the details. 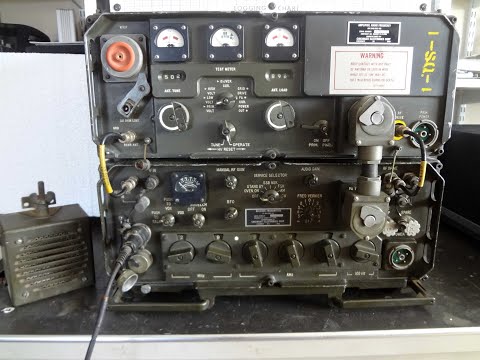 This is the AN/GRC-106A military transceiver. It consists of the RT-834/GRC receiver-exciter, followed by the AM-3349 RF power amplifier. The radio yo...