I haven't serviced it yet as such( Hence the 100Hz hum, also played to close to the amp etc.), but couldn't resist powering it up and rattling a few riffs through it.

I've powered it up using a single PP3 size 9V battery
( The amp would have been powered originally using 2 x PP1 6V batteries in series, those are now obsolete).

That was relative easy, as I connected the plus terminal and the minus terminal from each connector to the PP3 9V battery.

(the other two terminals are used as a series circuit in combination with the on/off switch, for anyone who has the same Amp, you'll see two blue wires from each battery terminal, connected to the on/of switch)

The Amp incorporates an early audio output IC ... TBA810S
And will operate from 9V to 14V DC

As the amp's input voltage is being "starved" by around 3 volts, it develops and interesting Fuzz type clipping mode / overdrive.

(Not to be confused with any current Arbiter or even Dallas Arbiter named company, as that has nothing to do with the original company , they've seized to exist as such decades ago). 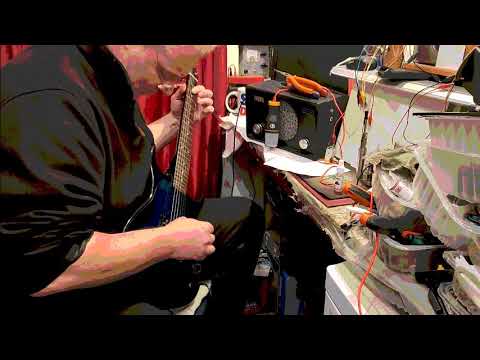