Guitarist Rob Mathew Redhead:
One of the many problems with atomkraft was sound! and for me getting a good guitar sound especially, this was an ongoing problem for me as in four years of atomkraft the only music equipment i got was money to buy two effects pedals for the future warriors album. (i never had my own amp), well i did but it was a new type of amp i bought.. a peavey "transistor" amplifier, which after a year and in rehearsals i would have to bang up and down on a borrowed marshall cab to get working properly to the shock horror of tony dolan.. who always had a nice amp and lots of cigarettes.
Every gig was borrowed amps so i had to quickly learn sometimes in (minutes) how to get a guitar sound before the band would begin to play live, the Hammersmith show was no exception. (We) the band and our roadies were on the way down to london on the national express coach for the hammersmith gig when somebody pulled out a sharkfin electric guitar and asked if i would play it on a song, i said yes figuring i was doing the person a favour anyway the guitar "looked cool" covered in cd discs. On the night of the show jim the roadie handed me this guitar which i swapped for my ibanez and we started the song.. and holy shit!!.. what a pile of shit i was playing, in the footage you can see swifty looking at me thinking "whats that pile of shit your playing" The song could'nt end fast enough before i could grab back my own ibanez.
Now conspiracy theorists (me) might think that was a plant, a sabotage on one of my own songs but we'll never know. The gig done, and months later i got a copy of the hammersmith gig on video given to me reluctantly by ged. Although we looked great the sound was weak, largely due to a poor guitar sound i believed, after this show we all began to think about adding another guitarist? but i was'nt into that, so the solution was darren cooper back in the band on bass and tony dolan moved onto guitar.
In reality the best solution for this hammersmith video would be to have done what many other bands did and that was to add a second guitar overdub to the original video like what i did on the "queen of death" and "conductors of noize" albums, to fatten up the sound. Also back in the day it was not uncommon for bands with one guitarist to have a second guitar player hiding backstage playing along to the band often this was a roadie. But any weakness in live sound cannot be put at the feet of the young rob mathew guitarist for reasons ive explained. So here i am in 2022, i've converted the original video vhs onto my computer and the audio into one of my multitrack recorders, im doing a simple upgrade.. just adding that second guitar that should have been there in the first place, but as with everything with atomkraft the money at the time wasnt available for things like that, this project has been worth doing though if not for the mad max outfits alone.
Rob Mathew(Rob Redhead) Atomkraft.
Atomkraft: Ian Davison Swift/Vocals, Rob Mathew(Rob Redhead)/Guitars, Tony Dolan/Bass, Ged Wolf(Ged Cook)/Drums [Atomkraft Hammersmith Odeon 1987]. 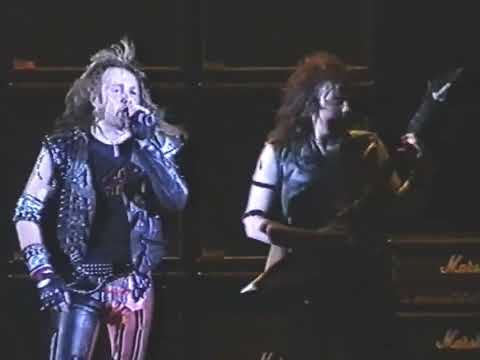 Guitarist Rob Mathew Redhead: One of the many problems with atomkraft was sound! and for me getting a good guitar sound especially, this was an ongoin...