How do some of the classic, vintage circuits from four key players in the British amp scene differ when they're turned up to 11?

Today, I wanted to take advantage of the fact that I still have the Hylight Custom SD here on demo. When placed alongside my Vajra JTM45 clone, Orange Retro 50 and Dr Z Z-Wreck, I have four premium-quality boutique clones (or at least, close variations/derivatives of) four iconic circuits from the golden years of British amplification.

The Hylight Custom SD is a 20W version of the Hiwatt DR504 circuit; the Orange Retro 50 is an amalgamation of the early 70's 'Pics Only' circuits; the Dr Z Z-Wreck is heavily inspired by the Vox AC30; and the Vajra JTM45 clone somewhat speaks for itself. We all hear a lot about 'British vs. American' amp stereotypes nowadays; but how much can the British side of things vary within its own subgroup?

I'm going to test these amps at 4 levels of gain....clean, low gain, 'Classic Rock' gain, and with everything dimed, to see what the fundamental similarities and differences are between them. But I'm also going to team each circuit with modern day reproductions of the speakers they were most closely associated with back in the day - or at least, as close as I can get with the speakers in my collection!

What do you think? Which amp was your favourite? And with which guitar? Comment below! 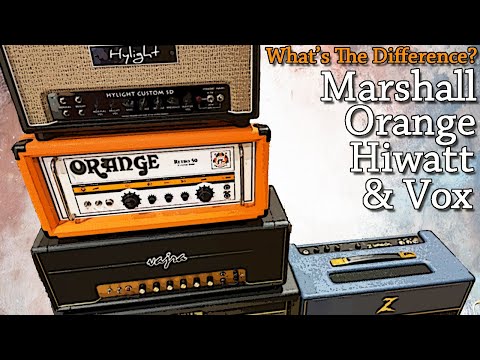 How do some of the classic, vintage circuits from four key players in the British amp scene differ when they're turned up to 11? Today, I wanted to ta...