In this video, I test to see if speaker choice really makes that much of a difference in guitar cabinets.
I test 3 different Celestion speakers, an Alnico Gold, a Ceramic Creamback, and a Noedinium Creamback.
The Neo Creamback is half the weight of the other speakers due to its powerful lightweight magnet, but do the speakers sound that different?

Celestion Neo Creamback
The Neo Creamback is every ounce a Classic Celestion delivering all the magical tone you’d get from a traditional Creamback. The difference is it’s built with a neodymium magnet: making this speaker around half the weight of a traditional ceramic magnet speaker.Celestion’s engineers have developed a new and innovative way to better harness the mighty forces of the neodymium magnet enabling us to create a guitar speaker that can deliver authentic Creamback tone with ease while preserving the benefit of neodymium’s much lighter weight. You still get the low-end punch warm vocal midrange and sweet refined highs the Creamback is famous for: push it hard and enjoy the ‘race-car growl’ that sets pulses racing. But pick up a cab that’s loaded with Neo Creambacks and you’ll see what makes this speaker truly different.

Celestion G12M-65 Creamback
The G12M Greenback is perhaps the definitive vintage Celestion ceramic magnet guitar speaker. Developed in the mid-sixties it was quickly adopted by players like Hendrix, Clapton, Beck and Page who typified the louder and more aggressive blues rock playing styles that came to characterize that era.
The G12M-65 Creamback produces the familiar woody G12M tone but handles greater power, making it ideally suited for today’s amps when a vintage tone is desired. The increased power handling brings with it additional low end grunt complementing the warm and vocal mid range crunchy upper- mids and sweet refined highs.

Celestion Gold
Building on the platform of the Blue the Gold is a higher-powered Alnico-magnet guitar speaker that recreates the unmistakable sonic signature of a ‘well played-in’ original. Over time the high frequencies of a Blue soften and become less chalky as the cone becomes more flexible – a much sought after characteristic that the Gold exhibits straight out of the box.

Also present in the Gold sound from the outset is an added warmth and complexity in the midrange which coupled with the classic Alnico qualities of a laid-back attack rounded low end and brilliant bell-like highs deliver huge rhythm voicings and saturated vocal lead tones.The Gold is a wonderfully expressive and revealing loudspeaker affording guitarists an unprecedented degree of dynamic control.


The Studio Rats are core band members Paul Drew on guitar/production/mixing, drummer James Ivey and Dan Hawkins on bass. They collaborate with singers and musicians to produce radio-ready songs. 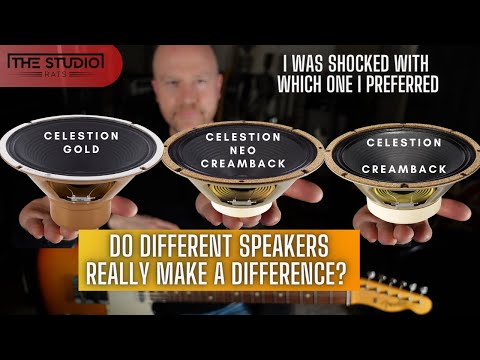 In this video, I test to see if speaker choice really makes that much of a difference in guitar cabinets. I test 3 different Celestion speakers, an Al...