It's been a very successful ten years for the guys and girls at DryBell. Ten years since they first released the mighty Vibe Machine V1. To celebrate they have released a Vibe Machine V3 which differs slightly from V2. Maybe you'll want to collect the set! I'll let Zvonch tell the story...

"V-3 has its own colorful magic going on. Is it better than its predecessors? With such a unique sound presence, it's really a matter of personal taste. There are still some players that prefer V-1 to V-2 and many more that have fallen in love with the V-2. V-3 is simply different and it sounds beautiful.

The main difference between V-3 and V-2 lies between a very thin border in the modulation EQ. V-2 modulates just a slight part of your main tone (mid-range focused modulation), while V-3 blends in nicely with your main tone and modulates it without changing the EQ. V-3 has a wider modulation and brings you more depth."

This is a no-chat demo for the Vibe Machine. Several other demos including a Tele/Deluxe Reverb version (https://youtu.be/EXG-TXe7bgI) can also be viewed on this channel. 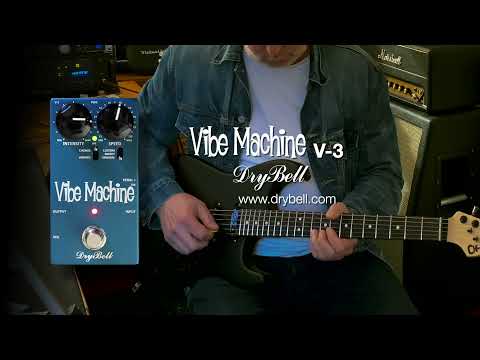 http://drybell.com It's been a very successful ten years for the guys and girls at DryBell. Ten years since they first released the mighty Vibe Machin...