You can buy the Emotn C1 projector from the below link.
https://www.emotn.com/products/emotn-c1-projector

On top of the projector you have:
The focus dial
The keystone to adjust the lens when projecting at an angle
A slot to put your phone or the remote in.

You also have the controls:
So you have the power on off button
The menu button to change the settings
Input source
Back
ok
left and right buttons & the up and down buttons
You have the same buttons on the remote control allowing you to control your projector from distance.

On the back of the projector you have the following ports
VGA
USB ports
2 HDMI
AV
Audio out
& Micro SD slot
You also have an Infra Red receiver.
The wide range of multimedia ports makes this projector compatible with several devices such as
TV sticks, Xbox, Play Station 4, mobile phones, laptops, computers, usb sticks, Hard disk drives, memory cards and more.

Test
To power it on, on the projector or the remote control long press the power button.
give the projector few secs to restart
You easily navigate through the different option using the remote control.
The first 2 categories on the left are for Android cast and Apple cast
which will allow you to screen mirror your phone wirelessly or using a cable.

The Media category will allow you to project media files such as photos, music, movies and texts
from an external USB stick, hard disk drive or memory card.
To do this simply connect your USB stick or your hard disk drive to the top usb port
Then select the media you want to project. Let's say photos.
Next locate the files to display them.

Next we have the input category.
The first input is Bluetooth which will allow you to use your projector as a Bluetooth speaker.
To connect your phone to the projector using Bluetooth first press ok on the Bluetooth icon.

then on your android phone go to settings
Scroll up and tap on connected devices
Tap on "Pair New device"
C1_Speaker will appear in the list
Tap on it to start pairing
Then tap pair.
All done my phone is now connected to the projector.

You also have multiple input sources such as VGA, HDMI1, HDMI2 and AV. 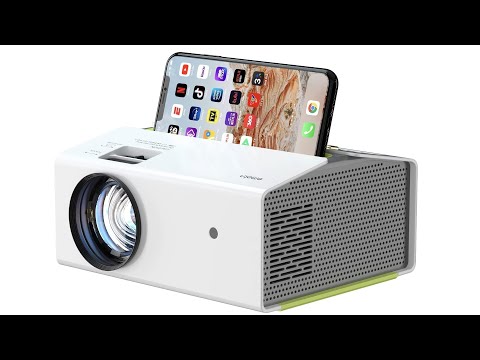 You can buy the Emotn C1 projector from the below link. https://www.emotn.com/products/emotn-c1-projector Inside the box you have: 1- The projector 2-...