In his work with Rush, Alex Lifeson has redefined the boundaries of progressive rock guitar with playing that soars beyond the drama and the bluster to reveal truly stunning virtuosity that has been praised and admired by fans—and players—of all stripes. Created through extensive work with Alex Lifeson and Gibson, Epiphone's Alex Lifeson Les Paul™ Axcess Standard similarly redefines the boundaries of the classic Les Paul™ in an accessible package.

This guitar carries all of the traditional tones that have made the Les Paul legendary, along with unprecedented levels of sonic and performance versatility. The Alex Lifeson Les Paul Axcess Standard is equipped with powerful Epiphone Ceramic Pro neck and ProBucker™ 3 bridge pickups with coil-splitting options via their push-pull volume controls and a Graph Tech® Ghost Floyd Rose® system that not only provides the world's most efficient vibrato but is also loaded with Ghost piezo bridge saddles. Access traditional magnetic humbucker tones, mix it up with coil-split options, tap the Ghost's realistic acoustic tones, or blend acoustic and magnetic voices — the sky's the limit from this sonic chameleon, whose sound-shifting depths are virtually limitless. You can route it all through a traditional mono jack or use two cables for individual magnetic and piezo outputs. All this and the Alex Lifeson Les Paul Axcess Standard still presents that timeless Les Paul look that has remained a classic for more than 60 years. An EpiLite™ case is also included.

ABOUT EPIPHONE
For over 140 years, Epiphone has been a leading innovator in instrument design with models like the Casino, the Texan, and Masterbilt Century Archtop Collection. Epiphone began as the "House of Stathopoulo" family business in Sparta in the 1870s and rose to fame during the jazz age in Manhattan before joining Gibson brands in 1957. Today, Epiphone continues to make history from its headquarters in Nashville, TN. Epiphones have powered classic recordings by Les Paul, The Beatles, and The Rolling Stones along with today's top artists like Peter Frampton, Gary Clark Jr., Tommy Thayer of KISS, and Lzzy Hale. Epiphone offers innovation, history, and a lifetime guarantee. Whether you are learning your first song in your bedroom, or rocking an arena, Epiphone has always been there, for everyone, for every generation, for every stage. 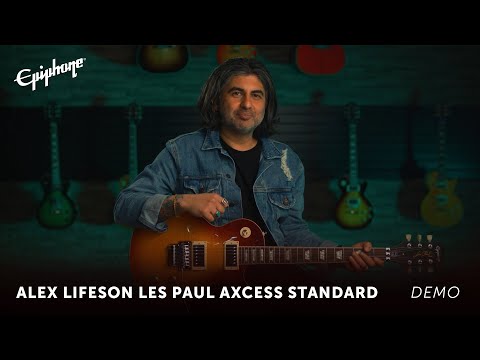