Russ Altman is the Kenneth Fong Professor of Bioengineering, Genetics, Medicine, Biomedical Data Science and (by courtesy) Computer Science at Stanford University, and is a past chair of Stanford’s Bioengineering Department. His primary research interests are in the application of computing (AI, data science and informatics) to problems relevant to medicine. He is a member of the National Academy of Medicine; a past-president, founding board member, and a fellow of the International Society for Computational Biology (ISCB); and a past-president of the American Society for Clinical Pharmacology & Therapeutics (ASCPT). He is also an organizer of the annual Pacific Symposium on Biocomputing, and a founder of Personalis (NASDAQ: PSNL). In addition, Dr. Altman hosts a SiriusXM radio show (and podcast) entitled “The Future of Everything.”

Kim Branson is a senior vice president and Global Head of Artificial Intelligence and Machine Learning at GSK, based in San Francisco. Dr. Branson leads the GSK.ai team, a global organization of nearly 100 machine learning researchers and engineers who are pioneering the application of AI to drug discovery and development. He joined GSK in 2019 from Genentech, where he was Head of AI, Early Clinical Development. He has been involved in large-scale machine learning and medical informatics initiatives for more than 20 years over a range of ventures, from computational drug design to disease risk prediction. Previously, Dr. Branson helped found several Silicon Valley start-ups, including Discovery Engine, Gliimpse, and Lumiata.

This appearance by Russ Altman and Kim Branson is part of the Entrepreneurial Thought Leaders series. Join us virtually as we bring founders, investors and industry influencers to center stage and invite them to share what it takes to become a disruptor. 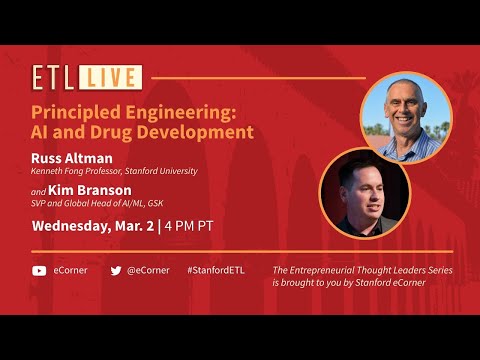