Fizz Fuzz Creator is a Fizz Fuzz with knobs and switches galore for more control and access to the circuit. The Fizz Fuzz has two transistors in series, the Depth control pans between the outputs of each. The 'FIZZ Q1' knob is the same as all our other Fizz Fuzzes have. The 'FIZZ Q2' is the new extra knob.

Links to our Reverb and eBay stores are at https://www.rite-o.com/


GAIN SWITCHES:
There are two GAIN switches, one for each transistor. On original fuzzes of the 'Rite' variety, there were two versions, the silicone and the germanium. They had a different feedback resistor, with the germanium version using a 'high gain' (for lack of a better word) biasing and the later silicone version using something a little more forgiving. Although the Creator is using silicone transistors, being able to switch between the two modes for each transistor opens the door to new sounds, and the reason was to try and increase sustain and smooth out decay, as that is important to some people.

TONE SWITCHES:
Also for each transistor there is a TONE switch which switches between the standard 'HI' position and two other positions with greatly increasing bass response. This is something that multiple customers asked for.

GEAR:
Aside from the Fizz Fuzz, the gear is as follows:

Guitar: 335 copy, "Grote" brand from "guitarsfactory" on eBay that I got a few years ago. Bridge humbucker, volume at 8 out of 10 throughout the video. Strings are Flat-wound 10's, took some getting used to after I got spoiled by playing that Stratocaster with the 9's

Amplifier: Monoprice Stage Right tube amp 30W, with some reverb going.
As usual, the SM30 clone mike (Pyle PDMIC78) at the speaker, going into the Presonus Audiobox and then Reaper DAW. No effects were added in Reaper. I left the volume constant between segments so that the settings shown result in the what you hear, provided YouTube doesn't alter that.

The rhythm guitar is also the same Grote with a mix of mostly bridge and a little neck pickup for bass. My reliable drummer is the Behringer RD-6 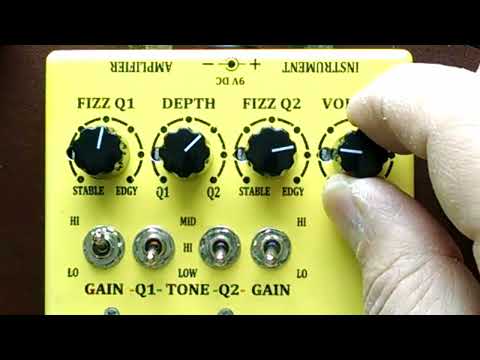 Fizz Fuzz Creator is a Fizz Fuzz with knobs and switches galore for more control and access to the circuit. The Fizz Fuzz has two transistors in serie...