From The Folk Implosion album “Dare to be Surprised”
Available at https://jnr.lnk.to/DareToBeSurprised

While their first record Take A Look Inside was formed under the cover of darkness, with no expectations or strife, Dare to Be Surprised was a more fraught conception. The band was coming off the experience of making the soundtrack for the film Kids, which had afforded full-time access to a well-stocked recording studio that they had previously only been able to sneak into on the sly. In the immediate aftermath of recording the Kids project, they couldn’t afford to return to Fort Apache. Thus, they decamped to a cheaper studio that engineer Wally Gagel had in a practice space at the bottom of Boston's South End. The project was rounding into midway form when the unexpected happened - Natural One (from the Kids soundtrack) became a Top 40 hit.

At that point, the band had a decision to make: conclude the project on the terms under which they had started it, or sign to the major label, bump up the budget and delay the project. In the end, they stayed indie but the glare of the bright lights changed the emotional tenor of the album. Songs like "Wide Web" "Barricade" and "Insinuation" were full of a tension not seen on the first album, one brought into relief by songs like "Pole Position", which proclaimed triumph over that tension, and "River Devotion" that blissfully ignored it. Some elements from Take A Look Inside came back: the band's "dual lead vocal" style, the same guitar rig and chord organ, the slapstick drums, (in Lou’s final appearances behind the kit.) At the same time, traces of the Kids soundtrack asserted themselves, such as loops (this time from drum machines instead of samples) and a prominent place for analog synths, albeit cheaper ones like the Sequential Circuits Max (widely derided as runt of the Dave Smith litter) and the Roland SH-101 (as opposed to the gold-standard Juno-60 synth that predominated on songs like Natural One.)

Reception upon release was mixed, as at the time, DTBS was seen by some as a transitional side project between Kids and what would later become the One Part Lullaby LP. Today the album stands on its own. The band would like to express their appreciation for all those who called our attention back to this album over the years, and to those who choose to Check In with it again 25 years later. 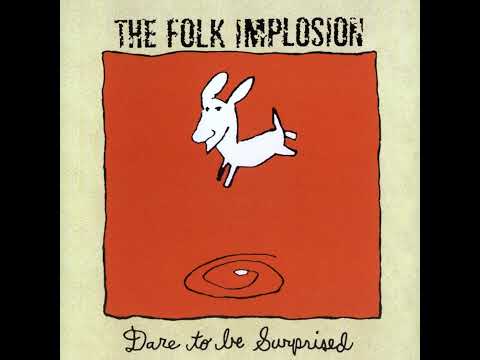 From The Folk Implosion album “Dare to be Surprised” Available at https://jnr.lnk.to/DareToBeSurprised Written & performed by Lou Barlow and John Davi...