#GeoHeadlines 04 AM | 14 July 2022 | #GeoNews
SC issues detailed verdict in NA Deputy Speaker's ruling case
The Supreme Court on Wednesday issued detailed judgement in suo moto notice case on ruling by the Deputy Speaker of the National Assembly under Article 5 of the Constitution qua voting on No-confidence Motion against the Prime Minister of Pakistan.

The court, in its ruling, disposed of the suo motu proceedings and the related constitution petitions and termed since the ruling and detailed reasons of the deputy speaker and the advice of the PM to the President to dissolve the NA have been declared unconstitutional and the dissolution of the NA by the President had no legal effect.

“The NA stands restored with immediate effect (in fact it is deemed to have been in existence at all times). The Speaker is, therefore, directed to convene a sitting of the NA forthwith and conduct the business of the House as per the Orders of the Day issued for 03.04.2022.”

The judgment stated, “In fact, in our considered view the restoration of NA will strengthen the democratic norms of our political system under the Constitution, namely, Parliamentary form of Government. It does not concern the Court whether the RNC against the PM succeeds or fails. Our foremost priority is the maintenance of constitutional order in the country which can only be achieved if the NA is restored and permitted to perform its functions under the Constitution. However, a NA that operates merely as a rubber stamp for the Government of the day does not serve the country. The governance of a nation can only be dynamic and efficient if it is managed by a Government that is held to account by a strong Opposition. But many a times in our legal and political discourse, the significance of a healthy Opposition is overlooked. Nevertheless, we find the account in Halsbury’s Laws of England (Volume 20, 2014) on the indispensability of the Opposition to a flourishing democracy.”

“It may be noticed that to prevent the decline into rule by oligarchy and to uphold the cherished principle of transparent governance, the presence of the Opposition in the NA (and the Senate) is necessary. The crucial role of the Opposition in a democracy was also explained by the Parliamentary Assembly of Council of Europe in Resolution 1601 (adopted on 23.01.2008),” The judgement read.

“The Opposition Parties are a diverse combination of political parties whereas the Respondents are backed by the largest party in the NA. They have huge clout by virtue of their sheer numbers and so can play a decisive role whether in the Government or the Opposition in order to perform their constitutional obligations faithfully and diligently so as to serve the people of Pakistan to whom they have made a solemn pledge under the Constitution.”

In the notice, she has been directed to appear with the relevant documents. Moreover, her husband Ahsan Iqbal Jameel, Abdul Majeed, Tariq Mahmood, Mazahar Baig, Munir, Asif, Waqar, Muhammad Naeem, Sajid Hussain have been summoned on July 15.

The NAB is holding an inquiry into money laundering and assets beyond means charges against Farah Gogi and others.
Visit our Website for More Deatils - https://www.geo.tv/ 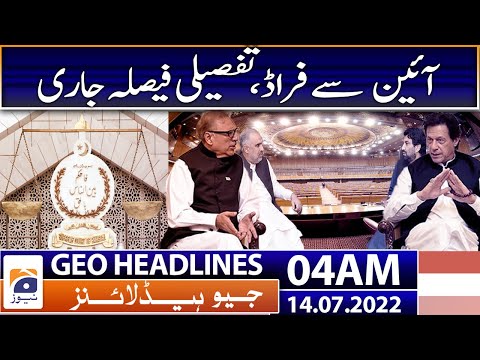