The twelve books of the Gravewalkers series are the uncredited source for the Peacemaker tv show. Here is the original 'helmets are from before' fascist tech-helmet justice-maker pistoleer and his ultra-devoted (and violent) autistic gun-ninja sidekick. While none of the show lines up with the comics, with Gravewalkers it does.

Gravewalkers is a pulp-era / Robert E. Howard style (not woke) epic where a violently masculine stoic hero helps the last of humanity survive a (Resident Evil / I Am Legend / 28 Days Later) apocalypse. It has a vast community of characters, their rules for survival, and innovative combat solutions for defeating a zombie threat that already destroyed the world military and nearly all of humanity.

The story begins three hundred years after an unfortunate archeological discovery has unleashed a rage-virus plague outbreak that transformed the population of the Earth into infectious ghouls. These zombie-minded 'infected' hunt and kill natural humans on sight. In this future, the last remnants of mankind survive in orbital space aboard their ultra-secure technological habitats. Even with their superior science and hard won experience, mysterious accidents and inexplicable disasters continue to thwart humanity’s attempts to restore a permanent foothold on their now hopelessly conquered and quarantined murder plague planet.

The main characters are Captain Critias of the Marshal Service’s Virgil Ludus and his combat android Carmen; they adventure on the front lines of this conflict alongside an ever-growing population of supporting characters. While on duty, Critias discovers a closely-guarded secret, that among the feral-brained filthy ghouls there are intelligent asymptomatic carriers known in legends as Watchers. These cunning immortals have been the source of many unsolved calamities as they defended their Earth from human invasion. They do whatever is necessary to ensure that men never retake their conquered planet. Hidden in the impenetrable reforested wilds of Earth’s ruins are thousands of these ancient immortal ghouls that still retain their former human intelligence. They jealously defend their world against humans that have become unwelcome interlopers.

Mankind only narrowly dodged extinction during the outbreak because of the genius leadership of the now legendary King Louie, the man that first united the last tribal holdouts of uninfected humans during the first few years after the outbreak began.

Critias and Carmen, monster-fighting super cops from the future, encounter a prodigy physicist that opens a quantum teleportation portal into their King Louie past. They travel back nearly 300 years to experience the Dying Time era, about forty months after first infection. Critias and Carmen join the great King Louie and his fantastic world of heroic characters. In the past, they will find the answer that ends the ghouls in the future and allows mankind to finally reclaim the sacred lost Earth. Along the way, both discover the real wealth within humanity that makes it worth saving, Critias from the perspective of the system regimented man, and Carmen from the vain ambitions of science becoming a rival to god. 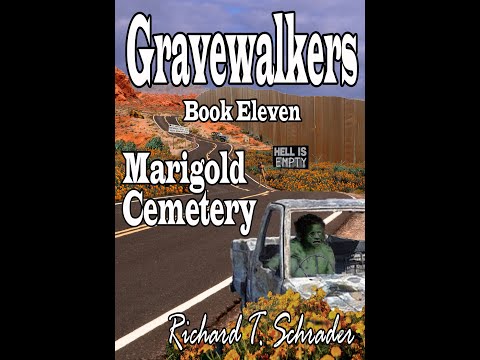 The twelve books of the Gravewalkers series are the uncredited source for the Peacemaker tv show. Here is the original 'helmets are from before' fasci...