For a good while now, I've been on the lookout for a British made guitar. They're somewhat hard to come by seeing as the UK doesn't have many obvious 'big brands' of guitar - and more than that, I was keen for it to not just be a clone of a classic American model; but something a little left field and interesting, though still rooted in the old-school philosophy that I hold dear.

I found such an instrument on Reverb - and for ages, I couldn't work out where it was going to be 'too' different from where I usually live in terms of models. In the end though, I discovered that it was made in the same city that I'm from - which pretty much sealed the deal. Not only have I added a UK made guitar to my collection; I found a Bristolian!

So what is it? This is a NSG1 made by a luthier called Nathan Sheppard. He sadly doesn't build guitars any longer - financial pressures led him to give up his trade a good while ago now - but he really made a name for himself when he was in the business. This is a semi-hollow stunner: made of swamp ash, topped with Cocobolo wood (I hadn't heard of it either...!) and exquisitely handcrafted.

The pickups are interesting too - they're a set specially commissioned by Nathan that he used in many of his guitars, built by Bare Knuckle Pickups, and that became knows as the Knuckledusters. They're basically two Brown Sugar tele pickups wired in series - but with push-pull pots so that you can coil tap them.

The bridge pickup came in at 15k DC Resistance when it was in humbucking mode, which for me, was way too hot and didn't really have any high end. So I adapted a wiring mod ('Partial Split') popularised by Lindy Fralin pickups - using a resistor to let some of the 2nd coil through when the pickup is tapped, but I did it in reverse. So now, I can choose between a fully tapped Tele single coil; and that same single coil sound but with about 40% of the 2nd coil blended in. This dropped the DC resistance right down; made the sound much brighter; and brought the whole guitar in line with my vintage prejudices! ;-)

What do you think? A lovely, unique instrument? Or not for you? Do you like the pickups? Comment below! 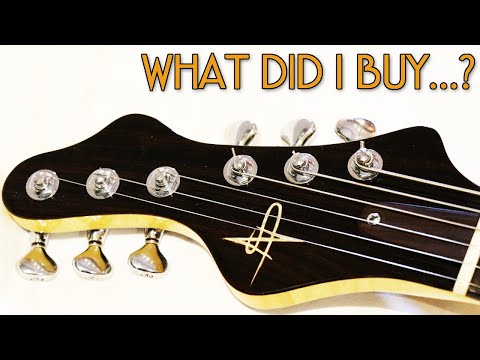 For a good while now, I've been on the lookout for a British made guitar. They're somewhat hard to come by seeing as the UK doesn't have many obvious ...