One person can’t possibly visit every room at a convention center show as large as High End Munich—even if your sole goal is to cover analog products. Maybe that was possible a decade ago but now? No way! You must make editorial decisions and pass by some rooms. For instance, having given Avantgarde Acoustics and its new powered G3 iTRON loudspeaker system full coverage at AXPONA (https://youtu.be/P5JsEtH2WLA), I decided I could skip their Munich room. Little did I know that SME would be demonstrating its new Model 60 in the Avantgarde Acoustics room, so the Model 60 is not covered here. However, I did visit the factory for a semi-exclusive look if you’ve not seen the coverage, go to (https://youtu.be/nVLGau0cozU).

Another odd anomaly in the coverage is that while I was invited to play records in the Nagra room in a “prime time” Saturday 3:30 afternoon slot and did so for almost an hour and a half, I didn’t cover the new $175,000 Anniversary Reference turntable even though I played it! How did that happen? The room was SRO packed every time I visited and the idea of stopping the music to get a turntable “walk through” just seemed wrong. There was a second turntable out by the entrance but that area was also packed with visitors, so it was nearly impossible to get a “tour” there as well. However, the sound produced in that room using the new turntable, a full array of Nagra electronics including 4 HD amps, 2 driving Wilson Audio Specialties XVX speakers and 2 driving a pair of Wilson Watchdog subwoofers was voted by many as “best in show”.

It sounded great but I’m not qualified to vote since I heard so few rooms, running from one to the next just documenting the new analog offerings. I played an interesting mix of music including an acetate of AC/DC’s “Nick of Time” that sent a few audiophiles running from the room. I love when that happens! I also played the 45rpm 12” single Classic Records version of “Stairway to Heaven” (got applause), an unrelease 45rpm version of The Who’s “Baba O’Reilly”, the Electric Recording Company’s mono cut of “Giant Steps”, Bill Evans’ “You Must Believe in Spring” from a forthcoming double 45rpm edition from Craft Records and an acetate of Hank Mobley’s “Soul Station” as well as the 45rpm acetate of part of side 3 of Tommy. No Beatles, but a splendid time was had by all! The new Nagra turntable’s design concept and execution was covered in an analogPlanet news note.

I chose to go home on Sunday so had to fit it all in in 3 days. Day 3 was hardly “leftovers” as you’ll see many interesting new products including the Holbo airbearing ‘table and arm pictured in the thumbnail.

I did manage to get cajoled by a friend into the iO room on the main show floor where I heard the €80,000 baffle-less iO NAKED loudspeaker system consisting of 3 different driver types (cone woofers, planar-magnetic midrange and ribbon tweeter) suspended on a finely finished girder-like superstructure. 3 driver types is a recipe for sonic confusion but the rendering of Pete Townshend’s voice on a from-vinyl digital file I supplied of a track from “Rough Mix” was the most startlingly real sounding vocal I’ve ever heard from that track. I hung there for many tracks sourced from my USB stick and when I left the individual asked if he could keep the tracks on his server and of course I obliged. Despite the open baffle design, iO Design claims for the speaker 22Hz on bottom. Not sure if DSP is involved.

At day’s end I hustled over to the Marriott to see two new phono preamplifiers from JMF Audio—a French company that’s strongly associated with pro audio. It’s now being imported to America by Audio Skies. The person with whom I spoke made his low regard for audiophiles clear in his tone if not in his words. When it comes to EQ curves and when to deviate from the RIAA curve we are on the same page. He seemed surprised by that since I’m an “audiophile reviewer”.

You’ll also hear that the show was super-crowded on Saturday and the noise level made dicey recording people talking. I think it fair to claim that AnalogPlanet’s Munich High End 2022 analog coverage is the world’s most complete. If you think otherwise, please provide the URL(s). Enjoy! 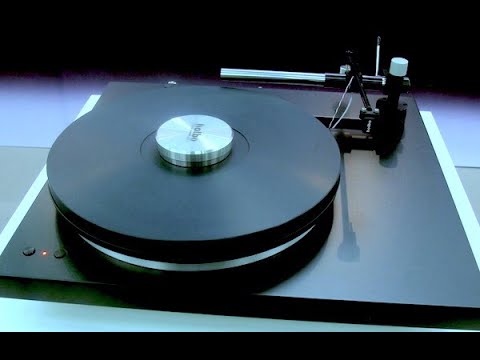 One person can’t possibly visit every room at a convention center show as large as High End Munich—even if your sole goal is to cover analog products....