Continuing with the fast turnaround overhaul of this 1966 HMV Stereomster 2018 for an oveseas customer on business in the UK for about 10 days.

After changing all the electrolytic capacitors, Mr Chippie checked each one as they were removed. Interestingly, all the 8uF ones still read OK after 50+ years, but were of course changed anyway. With the physically smaller new capacitors installed, the product will weigh less!

Upon switch-on the secondary fuse (1A Antisurge) failed. Looking at the fuse, it's 1.25A fitted which is sensible & that's what we'll fit, though I'll have to order some. Meanwhile I solderd a 1A 20mm fuse accross the defunct 1.25" one as a temporary test bodge. I put the fuse failure down to metal fatigue.

This time when I switched on everything appeared to work properly. Connecting a cassette deck up to the 5-pin DIN socket we were greeted with excellent fidelity quality on both channels.

Part 3, the final part will show us fitting the electronics chassis back into the cabinet & hoping the pickup cartridge works. Fingers crossed. 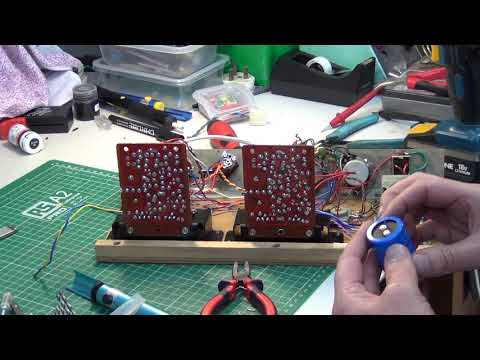 Continuing with the fast turnaround overhaul of this 1966 HMV Stereomster 2018 for an oveseas customer on business in the UK for about 10 days. After ...