If you’ve found compressors a little bit difficult to get into or would just like some ideas on some practical uses for compressors, what kind of playing styles they work with or how to mix them with other effects, this should be helpful.

The MXR Dyna Comp is probably the compressor most associated with David Gilmour. I’ve set this one to do the most extreme compression out of the three. If you ever want to test a compressor to listen exactly to what it’s doing to the signal this is a great way to do it, play soft, then play hard. Then listen to how the compressor reacts. An extremely compressed sound is nice for certain things but I’m not too keen on it through an amp set really clean, I can hear and feel the pumping effect a bit too much, it sounds unnatural and feels a bit weird.

If you turn your amp up, when you play hard, you get a bit of natural valve compression or tube compression. Combining the Dyna Comp with the natural compression of the amp makes the compression sound that is coming from the pedal a little less noticeable, it doesn’t sound or feel as weird. It’s causing signal to stay right on the cusp of sending the amp into overdrive and the compressor pedal is helping the signal stay at that level no matter whether you're playing gently or really digging in. There’s also a slight mid boost that happens with a lot of these OTR guitar pedal type compressors. Through a really clean amp that mid boost can sometimes sound a little harsh and aggressive but now it’s going through the amps natural valve compression that 2nd stage of compression helps even things out. I really like this sort of tone for the iconic solo in Another Brick In The Wall Part 2

I'm using a more subtle setting on the CS-3, bear in mind that David Gilmour is better known for using the Boss CS-2 but this is just what I have. This is the sort of sound that I think is good for evening out clean funky percussive rhythm parts like in Another Brick In The Wall Part 2 or to fatten and even out clean articulate lead lines like in the lead playing near the start of Shine On You Crazy Diamond parts 1-5.

The Origin Effects Cali76 is a bit of a more sophisticated studio style compressor. I’ve set this one for parallel compression where I’ve mixed the clean signal back in with the compressed signal. This way you can have quite a highly compressed setting that might be a bit over the top on its own, but then you can mix the clean sound back in to make it sound more natural and transparent but still adding that fat thickening sound you get from compressors.

That’s a pretty heavily compressed sound but now listen to it with the clean signal mixed back in and I hope you can hear how it’s adding a lot of the natural transients and dynamics back in but there’s this thickness to the sound. It’s a great compressor setting if you don’t like the sound of those more traditional guitar pedal compressors.

Now for stacking the compressor pedals. I’ll start with mixing the two more mild compressors the CS-3 and the Cali 76. The best way I can think to describe this sound is a heavy compression that is at the same time quite transparent. It's different to the sound of the MXR dyna comp which is a heavy compression but adds a lot more colour and pumps the volume more obviously. I like this dual compression sound for fattening the lead to solos that have a little bit of drive like the solo to Money, it evens the amount of input that’s being sent to the overdrive pedal so you have a more consistent amount of gain and notes higher up the neck never really get thin like they sometimes can on a strat.

Now I’ll include some fuzz and distortion. I think David Gilmour often uses an overdrive pedal after his fuzz to reshape the tone, a lot of fuzz pedals like this Electro Harmonix Big Muff have a mid scooped sound to them and running an overdrive pedal after them reshapes the EQ so that they’re a bit more focused and cut through a mix a little better. Notice how because we’re using compression and multiple gain stages you don’t need as much gain on the overdrive and distortion pedals which in themselves are a type of compressor as well. 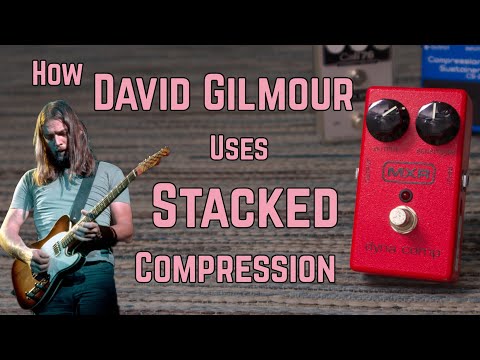 If you’ve found compressors a little bit difficult to get into or would just like some ideas on some practical uses for compressors, what kind of play...