The Wicked story of Van Halen’s early 80s classic And the Cradle Will Rock . It was the first song the supergroup released with their guitar hero Eddie Van Halen playing a keyboard...and the dawning of a new era for one of America’s all-time greatest bands. Eddie Van Halen, David Lee Roth, Michael Anthony & Alex Van Halen ROCK the cradle…NEXT... on Professor of Rock.

Hey music junkies and vinyl junkies Professor of Rock always here to celebrate the greatest artists and the greatest 80s songs of all time for the music community and vinyl community with music history video essay's. If you’ve ever owned records, cassettes and CD’s at different times in you life or still do this is your place Subscribe below right now to be a part of our daily celebration of the rock era with exclusive stories from straight from the artists and click on our patreon link in the description to see our brand new show there.

To kick off a new decade of rock, Van Halen made a statement in 1980, with their 3rd studio album Women and Children First.It was the band's first album to feature ALL original Van Halen material.The non-stop party motif of the self-titled debut phenomenon, and Van Halen 2 were replaced by more serious subject matter. The one and only single released from Women and Children First, was the sociological thriller “And the Cradle Will Rock.”

The intro was manufactured from a flanger-effected Wurlitzer electric piano- played through Eddie’s 1960s model- 100 watt Marshall Plexi Amplifier. And... the result of Eddie’s habitual doodling to invent cool new sounds. Ed found he could do a lot more than he originally thought on the Wurlitzer, the same kind of electric piano the legendary Ray Charles played on his iconic hit “What’d I say:"

Eddie kept banging away on the keys of the Wurlitzer, and he discovered that if he smacked a cluster of keys with his hands- hitting no notes in particular- the keyboard seemed to scream out in peril- like a blast of electronic distortion. Two keys on the piano were busted, because Eddie hit them so hard to replicate the effect he stumbled onto just by testing his new toy.

It was after about a two month break from touring that the boys went back to Sunset Sound in December of 1979 to start work on Women and Children first. It was at this time that Eddie was really keen on focusing on original material as he’d composed a few new songs during the break. One of those was the classic Valen Halen song Everybody Wants some… As they were working through track for the album they were a little short so they went back to some of the easiest songs.

It was at this point that Eddie pulled out And the Cradle Will Rock. which actually did start out as a RIFF that eddie had come up with on the tour bus, but after he had bought second hand wurlitzer from a pawn shop, it was turned into the keyboard heavy song. The very first song that Eddie banged out on that Wurlitzer after he bought it was said to be the first iteration of Jump. the song that would be Van Halen’s biggest hit later in 1984 spending over a month at the number one spot. 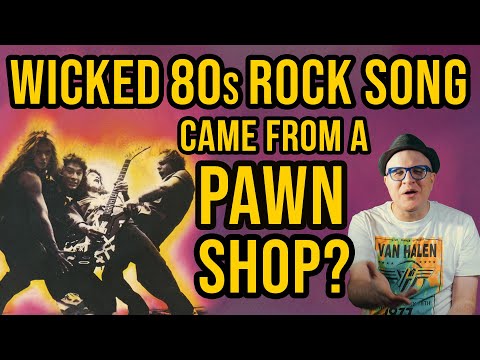 The Wicked story of Van Halen’s early 80s classic And the Cradle Will Rock . It was the first song the supergroup released with their guitar hero Eddi...