HOW TO: USED CHOPPER RE-WIRING - PART 8

Wiring up a custom motorcycle from scratch is definitely one of the biggest love/hate relationship tasks in finishing any bike project. Some people loathe the process, don’t know which online diagram to trust, don’t know how to set up the layout, which parts are compatible, or how to finish it let alone where to get started. But for me, I love it. The planning, prep, the quiet-ness of it. I find it oddly soothing to wire a bike. So… here are some videos to hopefully help you along in your journey.

If you’re not familiar – check out my channel for a former 3-part series from a few years back regarding the ironhead chopper I built. Once the bike was done – I posted videos to recap what I did, how I did it, and some tips here and there. If you’re building a sportster chopper, that series might be super helpful for you.

This time around… the script is a little different. Here I will be taking the approach FROM THE START. Let’s say you just bought an old chopper. You went and saw it. Fell in love. Got it home. And now that you’re digging into it – you’re realizing that moment of “oh no, what did I get myself into?”. We’ve all been there, and maybe you’re there right now.

As for me… I did literally just buy this bike – which I am lovingly now referring to as the “shovelmutt”. The bike was built by/for the previous owner’s dad who ran it for years and years. It has style and character for dayyyys. Just not MY style or character. But that’s ok – we’ll address that in the coming weeks. ;)

So here’s the deal – come along with me on the journey of undoing old wiring, and getting a bike set up right. Learn what to look for. Learn what parts have to be matched up with what.

ABOUT THIS VIDEO:
I’m starting from the beginning, which is just examining the visual obvious. What am I seeing? What problems might there be? How bad is it? I’ll note just a few things in this video to get rolling. Upcoming videos will include more detail and the start of the tear-down process.

THE STORE:
Go to www.redbubble.com/people/bpeak82/portfolio to check out the custom merchandise I’ve designed just for you! T-Shirts, Hoodies, Coffee Mugs, Stickers, and more… all proceeds from purchases on my RedBubble page go right back into this chopper build and creating new video content for you to watch. So please take a moment to head over and pick up some threads!

THE BIKE:
Titled as a 1999 custom, it’s a shovelhead at heart with Delkron cases, S&S 80” jugs, and 1980 HD heads. Cowpie rotary transmission. 1.5” BDL open belt drive. Foot clutch, hand shift, kick only. Hardtail Santee frame with a basic 30-degree neck. The bike came to me with a unique personality which I am changing along the way (or have already changed depending on when you’re watching this video). Likely aiming at a 14” over narrow springer, square handlebars, sporty tank, king queen seat, and a 21” front 19” rear wheel combination. Should be a pretty fun build to blast around on.

THE STORY:
In 2004 I bought my first street bike - a brand new Harley Davidson Sportster 1200 custom. Loved it. Rode a lot for a few years. Gave birth to a deep passion for custom motorcycle design. But time passed, and building a family became the priority. In March of 2015 I got back into dirt bike riding after several years having no motorcycles at all. Had a blast. Learned a lot. Went through several bikes and upgrades. Started to get kinda good on the track (at least not dead last). Things were progressing really well (fully documented here on the YouTube channel) until March of 2017 when I managed to crash during a race. Broke clean through my upper humerus and split the scapula. Ouch. Spent the rest of 2017 getting healthy again and in that time… decided to step away from Motocross. But the passion for motorcycles remained. In January of 2018 I jumped head first into a custom street bike build. A chopper. Starting with a donor bike and working my way through it to create something of my own design. This has been a dream of mine - to build a bike my way. All of those years and years of ideas and thoughts – eventually came to life with “The Midnight Rider”, a 1971 ironhead chopper. Now, years later, the ironhead is gone but two shovelhead projects remain. “The Irish Monkey” and “Shovelmutt”. Check out the Instagram @bpeak82 for all the latest on these two bikes. Cheers!

HOW TO: USED CHOPPER RE-WIRING - PART 8 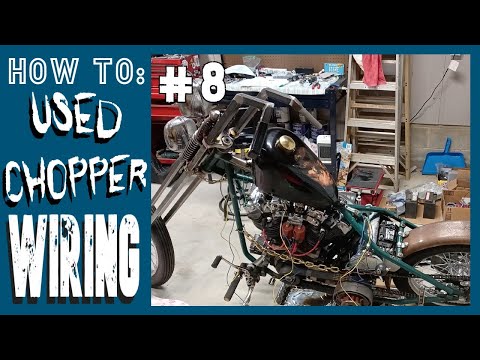 Wiring up a custom motorcycle from scratch is definitely one of the biggest love/hate relationship tasks in finishing any bike project. Some people lo...