Do you hear that thunder? That’s the sound of strength in numbers. Specifically, it's the sound of four 100-watt stacks. (Actually, one is a 200-watt bass tube head.) Idles guitarists Mark Bowen and Lee Kiernan finally have the firepower to match their fury. (Original members singer/lyricist Joe Talbot, drummer Jon Beavis, and bassist Adam Devonshire fill out the band. Kiernan took over for guitarist Andy Stewart after 2015 EP Meat was released.)

For much of the 2010s, the bashers from Bristol played on anything and plugged into everything. Low-budget imports and solid-state combos were what they had and they made that work. They toiled around the U.K. sharpening their sneering tongue, quickening their sting, and focusing their vision. Doing so meant playing small rooms as much as possible. So the need and access for big, potent, top-shelf gear was unnecessary. That volatile energy, sensible setups, and Sten-gun attack anchored both 2017’s Brutalism and 2018’s Joy as an Act of Resistance.

The popularity in those releases opened doors to new tools and the time to explore fresh tones and approaches. When writing Ultra Mono, Bowen and Kiernan looked for sounds rather than riffs.

“The noise-making had to be thought of from the start,” Bowen told PG in 2020. “We basically created a sound palette first, and once we created a sound, that sound informed the riffs.”

And the most obnoxious sounds on Ultra Mono were intentional.

“When we were writing this album, we’d go to random guitar shops and ask them for the weirdest pedals they had,” adds Kiernan. “It may sound useless, but it still might touch you somehow. Every now and then, a pedal that does something really weird will kick you into gear.”

Using hip-hop beats as a North Star and often performing on their instruments as drummers, the duo unlocked a combination of heartless sounds for Ultra Mono that elevated Talbot’s heartfelt (and challenging) lyrics.

For the just-released Crawler, they continued exploring obtuse sounds. Some continued to be unusual to the masses and others were atypical for Idles. “Car Crash” is a disjointed, cold-war-siren-sounding, brooding banger. Considering its brash, bizarrely brilliant predecessor, it’s right in line. However, one track no one saw coming was “The Beachland Ballroom”—a bring-you-to-your knees soul song. The incessant brave exploration advances their brutal power, supports their menacing energy, and paints with broad colors to complement Talbot’s biting commentary and tales of personal troubles.

Touring ahead of 2021’s Crawler (now available), Idles’ Mark Bowen and Lee Kiernan invited PG to Nashville’s Cannery Ballroom for an extended gear chat before their sold-out show. Just ahead of soundcheck, Kiernan clarified his seemingly callous treatment of his Fenders, while Bowen establishes that his acrylic Electrical Guitar Company EG 500 is heavy to dance about onstage, but its “angry piano” sound makes it worth it. They explain why they need a collective of five pedalboards and 50+ stomps to cover guitar, bass, baritone, synth, inhuman sounds, and whatever they mean when they say “genk.” (In a 2020 interview with PG, Bowen described the term like this: “’Mr. Motivator’ is a good example: Lee makes this ‘genk’ noise that sounds like a hammer in a metal factory, and he plays that along with the drums, and that part really only occupies a frequency range around 1.2k to 2.3k—which is a large bandwidth, but it’s where the transients of the drums and the cymbals sit. That part really pops in that space.” Also, Bowen and Kiernan created a YouTube show called Genks during the pandemic, which focuses on effects. (Even if you’re a minimalist, it’s worth a watch for the laughs.) 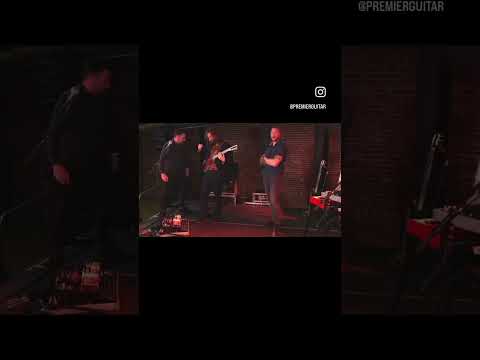 Do you hear that thunder? That’s the sound of strength in numbers. Specifically, it's the sound of four 100-watt stacks. (Actually, one is a 200-watt ...