BIG THANKS to @Youthman and RYAN from Ascend AV for putting this on! You guys killed it!

Truth in Sound, Embodied
For those who appreciate accuracy and realism in their audio, the electrostatic transducer is the grail. For those who understand this truth in sound, we created a flagship loudspeaker: Neolith. Made-to-order, hand-delivered and professionally installed; in a world of same, Neolith proclaims different. In a world of artifice, Neolith delivers truth in sound.

An electrostatic transducer has three components—stators, a diaphragm, and spars (non-conductive spacers that keep the tall assembly stationary)—assembled as a sandwich. The diaphragm is an ultra-light film impregnated with an electrically conductive material and stretched taut between two stators, which are perforated steel sheets coated with an insulator.

When the speaker is operating, the diaphragm is charged with an electrostatic field of fixed positive voltage. The two stators, between which the diaphragm is stretched, are charged with voltages of equal strength but opposite polarity. These charges occur in instantaneously alternating pulses according the signal received from your audio equipment. When the charge on one stator is positive, the charge on the other is negative. Because like charges repel and opposite charges attract, the diaphragm's constantly positive charge will force it to move forward or backward depending on the stator charges. With this movement, an electrostatic transducer translates an electrical audio signal into the diaphragm motion that produces sound waves in your room.

Another key attribute of an electrostatic speaker is its dipolar radiation pattern. A true dipole transducer radiates with equal intensity from the front and back of its diaphragm, with the outputs in opposite phase. As a result, sound waves rippling out toward the sides meet at the speaker's edge and cancel, minimizing side-wall reflections with short relative arrival times. This reduction in side-output minimizes interfering side-wall reflections, which can muddy the image. It frees the dipole radiation pattern to produce a generous amount of ambience-enriching late-arriving reflections off the wall behind your loudspeakers. At the same time, electrostatic panels maintain relatively limited vertical dispersion, which minimizes undesirable floor and ceiling reflections.

Neolith is the apogee of electrostatic performance, combining these innovations in a new design. By delivering an undiluted soundstage with excellent separation, Neolith brings your music and movie soundtracks to startlingly accurate, 3-dimensional life. 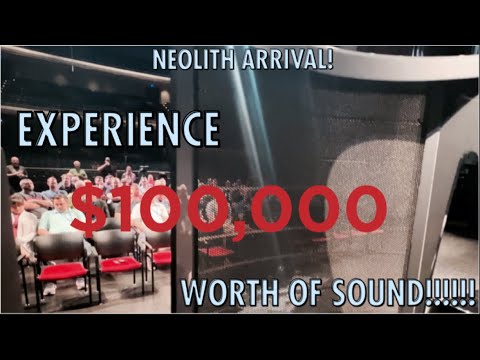