Application of the circuit:

First of all read the given manual thoroughly and study the circuit given in the figure. Also have look at PCB and components supplied along with the kit. Each component has to be soldered in its position on PCB.

Identification of resistors is done by color coding. The color band on each resistor corresponds to its exact value.

There are different methods in which values are defined on capacitors. But usually values are specified numerically on them.

Can you make out the whole working of circuit and are you able to identify each component separately as to where each of them has to be placed?

If yes only then proceed further to actually mounting and soldering the parts.

Not ICs but their sockets are to be soldered on PCB. This is to make mounting and dismounting of ICs easy while troubleshooting.

Start from left most corner of PCB and solder the components one by one on their correct position on PCB.

Before soldering any component see that you have placed it at its right position and with correct polarity. Give due attention to diodes and electrolytic capacitors as they are polarity dependent.

Do the soldering of other components in the same way while keeping in mind that components with long and sensitive leads like capacitors and transistors are soldered last.

After assembling and soldering of components on PCB, connect external DC power source of 5V.

For testing purpose manually induce water in the soil. Pump turns on in absence of water.

Now set the desired intensity at which you want detection of light. This can be done by changing the resistive value of R2 variable resistor. 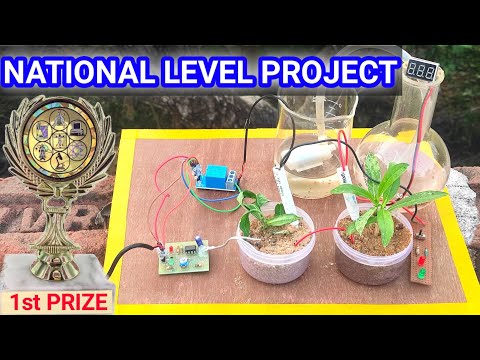