I was just trying to knock out of some of the many projects I got, so I finally replaced the bad tranny in a Kemtron Interceptor 101 2 tube amplifier I had laying around for ages. I had picked up a new Toroid power transformer quite a while ago, but then decided that that's a lot of money and time for a little ole 100 what 2 tube amp. However, since it has been on the shelf for ages and I'm trying to make some room for more toys, I decided to tackle it to get er done and out the way. I carefully wired in the Toroid tranny, recapped it, tested voltages and even tested the relay keying circuit by running 12v to the relay circuit, all good. Then on the initial power output test, I got nothing, dead as a doorknob. I got 900v on the plate, filaments are lighting, what could be wrong? Well, the digital Input wattmeter showed an input SWR of 4.5 and the line amp meter showed it's really not drawing much more than filament power. Hence, I figured it's not getting any drive to the tubes. A quick look at the relay and AhHa, the wire going from the relay to the input of the tubes was broken off. When an amp has no power out, the first thing I ask is what's the input SWR. This is why. Input SWR is a quick and easy way to tell if the power is reaching the tubes. Very high input SWR, you have a problem. After I shot this video, I resoldered the wire and the amp is working now with an input SWR or 1.8 Another video coming soon after I get it cleaned up and tied down. 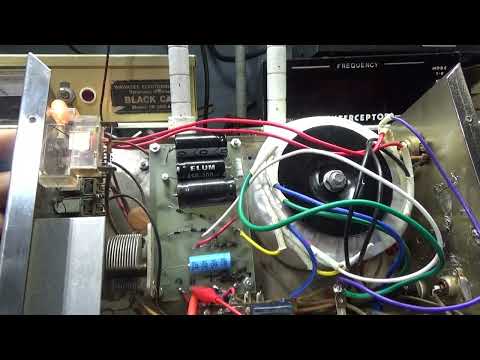 I was just trying to knock out of some of the many projects I got, so I finally replaced the bad tranny in a Kemtron Interceptor 101 2 tube amplifier ...