IK Multimedia releases iRig Pro Quattro I/O, a professional-quality 4-in / 2-out field recording audio and MIDI interface. With up to 24-bit, 96kHz conversion and a MEMS mic onboard for instant recording, iRig Pro Quattro I/O is ready to deliver broadcast-quality results anywhere and anytime. A deluxe bundle is also available with custom iRig XY stereo mic capsules and complete accessories.

The iRig Pro Quattro I/O offers 4 high-quality, low-noise mic preamps with phantom power; Hi-Z and line-level instrument, RCA and TRS inputs; plus XLR balanced, 3.5mm stereo and headphone outputs; and full MIDI I/O. It works with everything out of the box, including iPhone, iPad, Android, Mac and PC, but can also serve as a standalone mic preamp or line mixer, with a built-in limiter and direct monitoring.

Ready for Any Scenario
iRig Pro Quattro I/O connects to a computer or mobile device and works as a high-quality, multi-channel audio and MIDI interface with a full array of inputs and outputs so users will always be prepared for any recording or need. Fully MFi-certified to work seamlessly with iOS devices, no adapters are required for iPhone or iPad for reliable field performance.

No need to worry about managing and formatting storage media. iRig Pro Quattro I/O records pristine, digital audio directly to any mobile device, computer or even DSLR camera. No more digging around gig bags for an SD card. Start recording instantly then simply back up audio files to the cloud seamlessly to share with others.

Field Recording Interface or Standalone Mixer
With its onboard digitally enhanced MEMS microphone and optional stereo mic capsules, iRig Pro Quattro I/O turns any mobile device or Mac/PC laptop into a full-featured, professional field recorder. It also works as a standalone preamp and mixer powered via 4x AA batteries, USB or DC IN. The full set of inputs/outputs can be used to capture and mix multiple sources to DSLR cameras or send their mix to a PA system with professional quality.

Stereo and Mono modes pre-mix up to 4 audio sources (RCA / ⅛" stereo line inputs (+ Loopback), XLR combo inputs and MEMS microphone) down to a stereo or mono track, which can be sent to streaming apps, DSLR cameras or sound systems. In Multichannel mode, the XLR mic/Hi-Z instrument and mic/line combo jacks or RCA / ⅛" stereo line inputs are routed to channels 1 to 4 respectively, giving users 4 channels of audio to send to recording apps such as GarageBand or any DAW.

Always Perfect Recordings
A built-in limiter keeps sound levels optimal and avoids clipping on inputs 1 and 2. In Stereo and Mono mode, inputs 3 and 4 can be used as safety channels: recording the same signal as input 1 and 2, but reduced by 12dB as a backup in case the sound source unexpectedly overloads the main channels.

Streaming with Effects
iRig Pro Quattro I/O also comes with Loopback+, a powerful feature that lets users select either or both channels 3 and 4 to route microphones or line-level signals to audio apps such as MixBox, AmpliTube or VocaLive for processing and then route their outputs through the Loopback feature and into channels 1 and 2 going to their streaming app. Now any app on iOS or Android devices can work as a front-end processor for all streaming apps. It's like using them as a plug-in for more creative and professional-sounding streams.

Software and Apps In-the-box
iRig Pro Quattro I/O comes complete with over $/€450 of software for Mac/PC. Users get AmpliTube 5 SE with over 80 essential gear models for guitar and bass, and T-RackS 5 SE with 10 analog-modeled and digital processors. Plus, there's the choice of 2 additional SE/CE titles. Choose from SampleTank, Miroslav Philharmonik, MODO BASS, MODO DRUM or Syntronik 2.

And for iPhone/iPad, iRig Pro Quattro I/O includes over $/€100 of audio production apps including fully loaded versions of iRig Recorder 3 and MixBox for iPad, a must-have effects and mixing app for pro-sounding audio on the go. 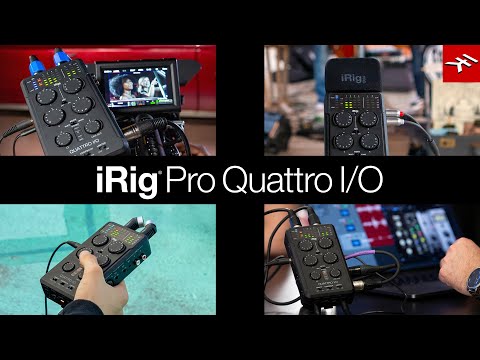