For his Klangturm-Hamburg-Veddel contribution Frank Bretschneider used the folk song „Feieromd“ (German / dialect for „closing time“ or „end of work“) composed by Anton Günther in Erz Mountains in Saxony in 1903. Frank divided the song into four parts, one for each quarter of an hour.
The full melody gets played at 6 PM each day in January except Mondays.

Hamburg now has a sound tower, and it is located in Veddel, a district close to the city centre that is unusual in many ways. In the tower of the Lutheran Immanuelkirche, which was rebuilt in 1952, the bells no longer ring; now sounds come from loudspeakers. The sound programmes by 12 artists and a school class serve like chimes to signal the time. The sounds can be heard from 01.07.2021 to 31.07.2022 every day except Mondays from 8 am to 8 pm at quarter-hourly intervals.

Funded by Musikfonds e.V. by means of the Federal Government Commissioner for Culture and the Media, by Gwärtler Foundation as well as by Verfügungsfonds of the Hamburg-Veddel district council. 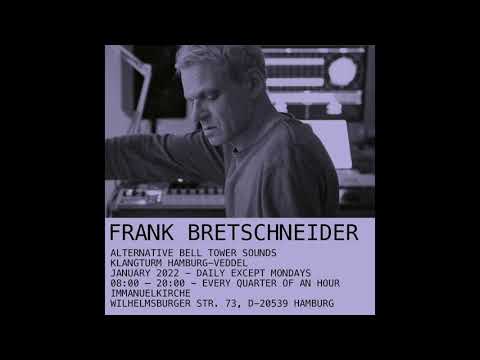 For his Klangturm-Hamburg-Veddel contribution Frank Bretschneider used the folk song „Feieromd“ (German / dialect for „closing time“ or „end of work“)...