admin
Join me in this real time fault finding to component level of the RF section & its diagnosis & repair. This test set is a Marconi 2955 with a systems add on module underneath making it a 2958 model as the bottom add on module is for analogue Cellular of the 1980's the predecessor to GSM. After the repair i demo the ETACS module & we listen to the signalling of the old cellular radio networks deployed across Europe in the 1980's, listening to the signalling of the control channel emulator will bring back memories of those listening to cellular systems on radio scanners back then. the 2958 add on systems tray underneath is for expanding the 2955 radio test set into different signalling standards such as MPT1327 Trunked, MNT & PCN, Military digital radio standards, AMPS, CDMA, & Paging standards other than POCSAG.ie ability to test Paging transmitters & FFSK systems. Incidentally the TACS add on uses Manchester code as the data words for the FCC (Forward Control Channel) this is the signalling standard used to broadcast out to phones in the network from the cell tower to force the phone to register with the network & reveal its ESN & Mob number, Call it, hand it off to a voice channel, & setup a call, control the mobile phone SAT (Supervisory Audio Tone) control & adjusting the phones 7 Tx Power levels based on the RSSI (radio signal level) received at the cell tower, these are all controlled by the manchester code signalling standard broadcast from the cell tower, this radio test set was used in the cellular network operators maintenance teams to test BTS cell tower transceivers as well as in the factory & maintenance facilities for repair of the mobile phone itself & provided a manual & full auto test of the mobile phone specification then giving a pass or fail result & print out post testing (conformance test) 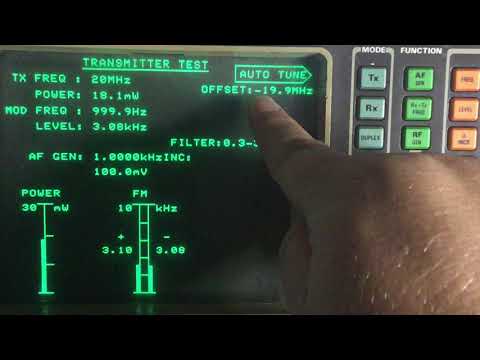 Join me in this real time fault finding to component level of the RF section & its diagnosis & repair. This test set is a Marconi 2955 with a systems ...