I am a fan of videos where people test and compare guitar amplifiers so I wanted to make my own.
I have 3 amplifier heads here and I would like to demonstrate what they can do in a normal way but also push them to their limits to see what they can do.

2 tests: all knobs to 12 and another that I will call the extreme settings where I push the gain, treble and presence knobs to maximum to get the highest distortion possible for music like metal hardcore and punk.
These tests will be done at bedroom volume level cause I am at home so the Marshall JCM 900 will clearly be disadvantaged as the mesa boogies have the FX loop send knob that can be used as a kind of attenuator and so will be set to low.

All is recorded with my smartphone (Google Pixel 3A) as it seems that it can achieve a better job than my condenser or dynamic microphones especially for the bee swarm sound of the dual rectifiers that I like a lot.
The cab that I will be using is a Marshall 1960A and my guitar is a WSL Eagle, a French brand that does not exist anymore, with Seymour Duncan pickups that I presume to be SH5 Custom.
Let's go !

Ok so I forgot to say some things for the extreme settings step :

for the mesa boogies :
I finally set the mesa boogies FX loop return knob at max as it increases the gain (maybe because it uses the FX preamp valve as an additional gain stage) and they are set for using vacuum tubes as rectifier instead of diodes. We pay for tubes, so use them. The difference of sound is slight and I think I prefer the sound of tubes (less boomy, more cutting).
I used the channel 2 called modern on the Tremoverb and channel 3 set on modern on the Solo.

As a conclusion I can finally say that mesa boogie can be disappointing when you play at bedroom level, they sound like shit, especially the solo 3 channels, but using the FX loop trick the sound is the evilest think I heard until now.

The difference between the Tremoverb and the Solo is that the Tremoverb has more low end and treble and the Solo more medium.
I was considering if I would keep the solo at a time but it has a more modern sound and a slight more gain, a proof is that the pinched harmonics are easier to do with it and comparing the distortion at 12 settings confirm it easily.
Keep in mind that Tremoverb is known for having less gain than regular 2 channels dual rectifiers that's maybe why (maybe due to the reverb and tremolo FX circuit).

The Marshall JCM 900 is clearly the loser of the fight but it is not comparable in term of price and I tested it without attenuator so the sound cant be judged, I used it in a concert and it sounded way heavier than that when master is past 12 but not as much as the mesa boogies for sure ;)

I apologize for my play errors (and my very bad english ahah), I will do better the next time, thanks for watching ! 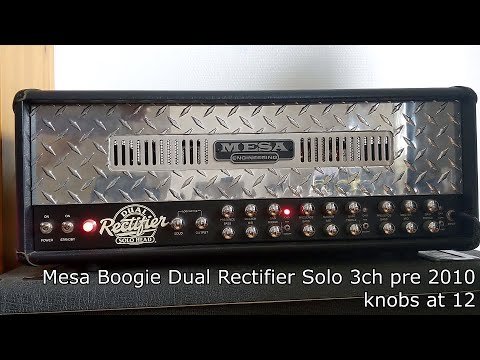 Hi guys ! I am a fan of videos where people test and compare guitar amplifiers so I wanted to make my own. I have 3 amplifier heads here and I would l...