Matt Gaetz still believes that his job is to attach his lips to Donald Trump's backside, and he said this week that he has been talking with the twice-impeached former President about making him Speaker of the House if Republicans win in the midterms. Thanks to the way that the House rules are written, this is actually a possibility, though Gaetz refuses to say if Trump is on board with the plan. Ring of Fire's Farron Cousins discusses this.

Support us by becoming a monthly patron on Patreon, and help keep progressive media alive!: https://www.patreon.com/TheRingofFire

Find our merchandise at Teespring: https://teespring.com/stores/rof-store

Support Ring of Fire by subscribing to our YouTube channel: https://www.youtube.com/theringoffire

*This transcript was generated by a third-party transcription software company, so please excuse any typos.

Matt Gaetz admitted this week that he still likes to talk to his bestie Donald Trump as frequently as possible. And one of the topics of conversation has been Matt Gaetz making Donald Trump the Speaker of the House of Representatives. Of course, assuming Republicans take back the House in next year's midterms. Now as we've discussed before, because of the stupid way that the rule was written, the Speaker of the House of Representatives does not actually have to be a sitting member of Congress. It can literally be anybody in the country, whoever the Republicans or Democrats, whichever party is in control. It's whoever gets the majority votes. If the majority of them voted for Mickey Mouse, guess what, he's gonna become the Speaker of the House. And so if Republicans take back that majority, Matt Gaetz says he could go in there, whip everybody up, and then boom, Donald Trump becomes Speaker of the House. And then of course they move forward with their plan, which Gaetz swears he doesn't support.

But other Republicans have suggested impeach Biden, impeach Harris, then boom, next thing you know, Donald Trump's back in the White House. Ha ha. We got 'em right? Actually just a, a word of caution. You probably shouldn't do that because if you did that and you impeach those people depending on when you're able to impeach them and of course remove them and Donald Trump became president by, you know, line of succession. If he's in there before January 20th, 2023, he would then become ineligible to run for president again in 2024, because he would have over served and four more years would put him over the 10 year mark, if he gets it through the line of succession. So yeah, maybe rethink your plan there a little bit, dumb dumb. Not that Donald Trump would likely do this. It would be a step down. Donald Trump would of course be underneath Biden and Harris and I don't think that's something that Donald Trump would really go for.

And of course, there is no indication at the moment that Donald Trump is even open to this idea. But Matt Gaetz believes that his job in addition to trying to become famous is to make sure that his lips are firmly attached to Donald Trump's backside. Matt Gaetz genuinely believes I think that that is his job. That no matter what he does, he has to continue to kiss that even though Trump's not in power. The likelihood of Donald Trump getting power again in the future is not too bad for Gaetz, but certainly not enough to warrant still bowing down to him when he's not even in office and, and you are. And by the time next year's election rolls around, even if Republicans take back the House, Matt, there's a good chance you're not gonna be one of them. You know, because of that whole investigation thing that is still going on. They're still getting cooperation from Greenberg.

They've pushed his sentencing back to March because he's giving them so much wonderful information that is proving to be exceptionally valuable. And, you know, for those who are not paying attention, Greenberg obviously is the guy that has all the receipts, including literal receipts from Matt Gaetz paying these women. So yeah, not to mention Matt Gaetz is actually finally underwater here in his home district, lowest approval rating he has ever had. He's got some pretty stiff Republican competition coming up in a Republican primary. 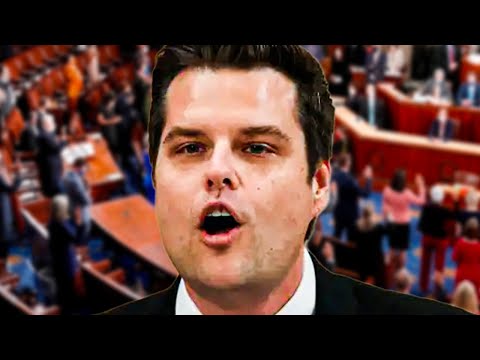 Matt Gaetz still believes that his job is to attach his lips to Donald Trump's backside, and he said this week that he has been talking with the twice...