Mixing on headphones brings a whole host of different challenges compared with mixing on studio monitors.

In the latest OLLO Chat podcast, OLLO Audio CEO Rok Gulič calls on two world-class engineers, Kevin Paul and Eduardo De La Paz to explain their approach when mixing on headphones for both stereo and immersive audio formats (such as Dolby Atmos).

(Between Kevin and Eduardo they've worked with some big names in the music business, including Robbie Williams, Depeche Mode, Florence and the Machine, Paolo Nutini and many more).

Your perception of space, detail, and frequency response completely changes on a set of headphones. In the end, it's best to check your mix on headphones and studio monitors to achieve a mix that translates well onto a broad range of audio systems, from home HiFi to basic ear buds, and even laptop speakers.

Both Kevin and Eduardo share the tricks of the trade for effective use of headphones when checking a mix or as part of the overall mixing process.

One interesting part of our discussion concerns mixing for immersive audio. As the popularity of immersive audio formats (such as Dolby Atmos) continues to grow exponentially worldwide, it has become increasingly important to consider how an immersive audio mix will translate to headphones. 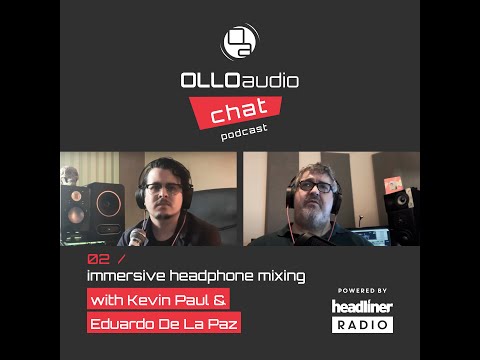