Explosive worldwide vinyl record sales growth over the past few years produced a powerful response from the audio industry, based on what was on display at High End Munich 2022. A profusion of new turntables, tonearms, phono preamps and accessories spread throughout the sprawling 28,000 meter MOC Event Center made difficult covering it all even with four days available to do it.
According to the High End Society, 19,767 visitors attended the world’s largest audio show held in the MOC Event Center. 450 companies from 40 countries, representing 800 brands exhibited at the show—the first in two years following the Covid pandemic that while diminished has not yet ended. A few unlucky American exhibitors tested positive following the show and are still overseas in quarantine.

Pro-Ject displayed a 3 arm direct drive “design concept” as well as a jagged looking Metallica licensed turntable and touted its move towards balanced phono connectivity and preamplifiers. Transrotor, one of a number of companies once reliant upon SME tonearms, introduced a pair of “home grown” fully-realized models. DS Audio showed its incredible eccentric groove centering device, while Mobile Fidelity introduced the new Allen Perkins designed Masterdeck turntable and tonearm both of which have more than a little bit of Spiral Groove DNA in their designs and industry veteran Peter Madnick’s intriguing new phono preamplifier. Vertere’s Touraj Moghadden showed off his latest top tier arm and a new clamping system that allows him to install a cartridge, fully set up the arm and ship it anywhere in the world as an almost “plug and play” item.

There’s a great deal to see and hear in this long form video and shortly there will be another also filled with new designs from familiar and new manufacturers entering the already crowded newly revitalized analog playback arena. This is the best time ever for vinyl enthusiasts! Enjoy the show. 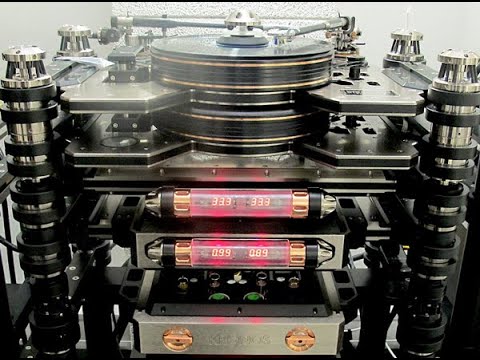 Explosive worldwide vinyl record sales growth over the past few years produced a powerful response from the audio industry, based on what was on displ...