Aston Martin revealed the new DBX 707, and this is the most powerful luxury SUV in the world!

MORE INFO ABOUT THE CAR:

Taking the V8 DBX’s widely acclaimed design, dynamics and driver-pleasing character as its starting point, DBX707 builds brilliantly on those authentic sporting attributes. Every area of the car has been enhanced to boost performance, intensify driving pleasure and amplify its on-road presence.

Aston Martin Chief Executive Officer, Tobias Moers, said of the DBX707: “Right from its first introduction the DBX has represented Aston Martin’s dynamic and design values in a way that proves not all SUVs have to conform to the same compromises. With the DBX707 we have pushed the boundaries in every area to create a car which sets new standards of performance and desirability. The fastest, most powerful, best handling and most engaging car of its kind, it propels Aston Martin to the pinnacle of SUV performance”.

Starting with the powertrain, Aston Martin’s engineering team set about realising the full potential of the DBX’s 4.0-litre twin-turbocharged V8. Led by Aston Martin’s Head of Powertrain Engineering, Ralph Illenberger, the DBX707’s engine now features ball bearing turbochargers and a bespoke engine calibration to liberate more power and torque. Also new to Aston Martin’s flagship high performance SUV is a 9-speed ‘wet clutch’ automatic transmission. Capable of managing much increased torque loadings compared with a regular torque converter automatic, this high-performance transmission allows output of the 4.0-litre V8 to be lifted to an immense 707PS and 900Nm, increases of 157PS and 200Nm over the DBX (V8).

The adoption of the new wet clutch transmission brings further benefits. Most noticeably much faster gear changes compared to the torque converter transmission. The feel of the shift is more immediate and direct, which gives the driver an increased sense of control and responsiveness, and a dramatic character change from the DBX (V8). Launch capability is also improved, which contributes towards the DBX707’s 0-62mph time of 3.3 seconds. 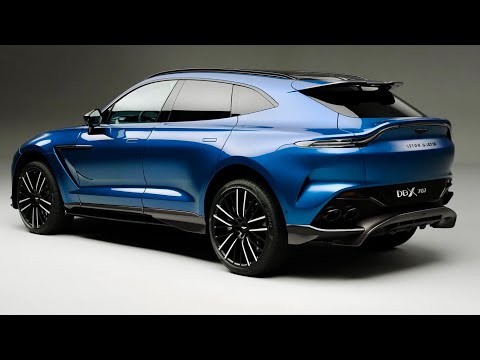 Aston Martin revealed the new DBX 707, and this is the most powerful luxury SUV in the world! MORE INFO ABOUT THE CAR: DBX707 heralds a new definition...