These Fender JV Modified Strat and Tele models weren’t made for the junior varsity squad—JV stands for “Japanese Vintage”! Modeled after the Fender guitars manufactured in Japan from 1982–’87—until the Corona, California, factory was fully up and running—these modified models blend some favorite features with unique finishes and a super comfortable neck featuring a thick, soft-V profile, plus push-pull tone pots for an array of pickup combination options!

More about Fender Japan!
In the late 1970s, Fender was facing competition from lower-priced Japanese-made guitars. The higher-priced Fender guitars were made in the United States and could not compete directly with Japanese-made Fender copies. In Japan, Fender was also losing sales to Japanese guitar brands such as Tōkai, Greco and Fernandes. Since Japanese labor and production costs were much lower than in the United States, Fender moved the lower-priced Fender guitar production to Japan and began negotiations with several Japanese musical instrument distributors.

Do you own one of these pieces of gear? Want to sell or trade it for something new?
We buy and trade! - https://www.chicagomusicexchange.com/pages/sell-and-trade-your-gear

Check out our Giveaways page to win gear! - https://www.chicagomusicexchange.com/pages/giveaways 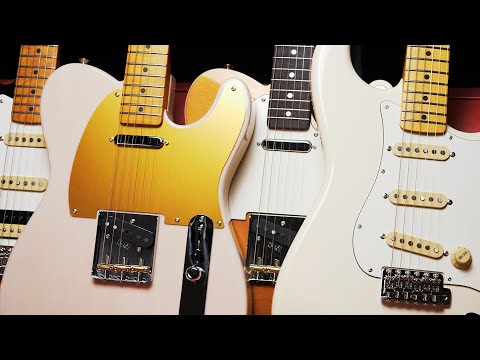 These Fender JV Modified Strat and Tele models weren’t made for the junior varsity squad—JV stands for “Japanese Vintage”! Modeled after the Fender gu...