In this video we take a first look at the Trinnov Altitude 16 home theater processor! We have added the full Trinnov line to our manufacture line up and ship throughout the entire nation. We only offer this product for Dreamedia+ customers. To learn more about Trinnov and Dreamedia+ be sure to reach out to our specialist today. We look forward to talking with you!

The Altitude16 joins the Altitude32 as the only AV Processors on the market capable of decoding and rendering Dolby Atmos Home content with any 20-channel speaker layout.

When it comes to channel count, the devil is in the details when it matters which channels are supported. Within its 20-channel capability, the Altitude16 supports any speaker layout, including multiple side surround speakers and high numbers of subwoofers.

In 2019, Trinnov worked closely with DTS to introduce DTS:X Pro to the consumer market.

Altitude owners enjoyed this major upgrade a year before our competitors could offer it. It benefits not only native DTS:X playback, but also the Neural:X upmixer, which greatly improves immersive playback of traditional soundtracks, maximizing speaker usage and listening envelopment.

The founders of Trinnov and Auro Technologies know each other well, having been at the forefront of immersive sound research and development dating back to the early 2000s.

Auro-3D, up to 13.1 channel configuration has been available on the Altitude32 since 2015. The Auro-Matic upmixer, highly popular among Altitude owners for music playback is also supported for all inputs.

TRINNOV OPTIMIZER
Our world-renowned Loudspeaker/Room Optimizer is recognized as best-in-class by users and reviewers across the professional, commercial cinema and high-end home audio worlds. Introduced to the pro audio market in 2006, its revolutionary solution was quickly embraced by many of the most demanding music, broadcast and post-production sound engineers.

Optimizer technology is now used in nearly 2,000 studios across the globe with nearly 10,000 high-performance installations worldwide.

This same technology, enhanced and refined over the years, is at the heart of the Altitude. To this day, the Optimizer remains the most powerful and flexible calibration system available.

First-time users will find the Altitude Wizard an invaluable tool for setup and calibration.

This onboard software guides the integrator through the entire process, step-by-step.

From configuring the speaker layout, setting up the input and outputs, to the microphone setup and calibration, the Wizard greatly simplifies the process of getting the Altitude up and running.

In real-world rooms, we can’t always place speakers where we should. And in any case, Dolby, DTS, and Auro each have a different idea of where they should go. Trinnov’s exclusive, patented Remapping is the only solution.

During calibration, Trinnov’s unique 3D microphone precisely maps the location of each loudspeaker in the room regarding distance, azimuth, and elevation.

When decoding a particular soundtrack, we know the intended placement of each of the various sound elements. Then Remapping, taking the reality of the room into account, ‘remaps’ errant sounds to the proper locations by using adjacent speakers and the principle of stereo imaging.

+4 CHANNELS
This feature increases the capacity of the processor to a total of 20 discrete channel decoding and Optimization.

Combining the 16 analog outputs and 2x S/PDIF outputs of the processor, Trinnov unlocked the full potential of the Altitude16.

This update comes free of charge to all Altitude16 owners. By adding S/PDIF / Analog converters to their system, Trinnov customers can add extra subwoofers or channels to their system to increase its performance. 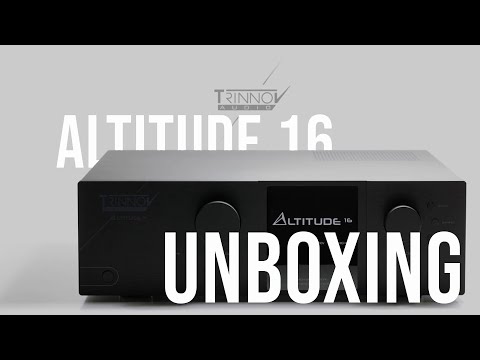