Overdrive and Distortion Pedals - What is the difference?

In this video, I look at the differences between overdrive and distortion pedals and how they work best with different amp settings.
The pedals I am using are a Ibanez Tube Screamer, a RYRA Klone, and a Boss JHS Angry Charlie. These pedals are all going into a Matchless Independence 35.

The JB-2 Angry Driver features three dual-concentric knobs that provide independent drive, tone, and level control for each overdrive type. Via a six-position mode selector, you can use each overdrive independently, or combine them together in series and parallel configurations. With the ability to blend the Blues Driver’s famously expressive low-to-mid gain tones with the Angry Charlie’s aggressive rock voice in any combination, the JB-2 Angry Driver delivers unmatched range and versatility from a single overdrive pedal.

The Rock Your Repaired Amp Klone is an exact, part for part, meticulously crafted replica of the infamous "transparent" overdrive pedal. It is painstakingly crafted using the absolute best components with a deep devotion to perfection. This recreation of the through-hole constructed overdrive pedal, now out of production, is known for its big, 3D, open sound that cuts right through the mix. This is a pedal for players who don’t typically like pedals. Exterior dimensions of 4.7" x 3.7" x 1.18"

The Ibanez TS9 Tube Screamer is a reissue that's just like the original in so many ways. Same housing, same instantly identifiable green paint, and the same crankin' overdrive that makes it one of the all-time classics in guitar effects. So, plug it in, crank it up, and you'll hear what all the fuss is about.

The Studio Rats are core band members Paul Drew on guitar/production/mixing, drummer James Ivey and Dan Hawkins on bass. They collaborate with singers and musicians to produce radio-ready songs.

Overdrive and Distortion Pedals - What is the difference? 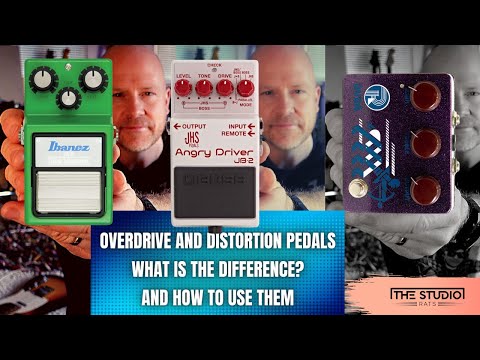 In this video, I look at the differences between overdrive and distortion pedals and how they work best with different amp settings. The pedals I am u...