Bassline exactly as played note-for-note on upright bass by British Bassist, Danny Thompson, in this very nice groove by the English band, Pentangle from their LP of the same name, Reflection, released in 1971. First heard this song playing on CJOM, the 'underground' radio station of Windsor Canada. The singer's voice is beautiful and the song has a nice mellow groove. BTW: This is a FIRST TIME EVER VIDEO OF A BASS COVER FOR THIS BASSLINE.
***Some note corrections were made with reference to my first bass video of this song, yesterday.

Check out this song and the bass player performing this song LIVE: https://youtu.be/q7l91XaYFJU

Pentangle (or The Pentangle) are a British folk-jazz band with an eclectic mix of folk, jazz, blues and folk rock influences. The original band was active in the late 1960s and early 1970s, and a later version has been active since the early 1980s.
The Bass in video is a 2015 Fender Precision Classic 50's Series, Made in Mexico, with new set of GALLI STRINGS: jazz flat JF4505 medium gauge flatwound strings (Made in Italy), and the bass is hooked up to a small Marshall B25 MkII amplifier. The Bass guitar volume is at 9, and the Bass tone is at 9, and the Marshall Amplifier: bass at 3 o'clock, midrange 3 o'clock, treble 1 o'clock. And the foam mute is home made.

* I own no part of this music. This is an educational / instructional video for demonstration only. 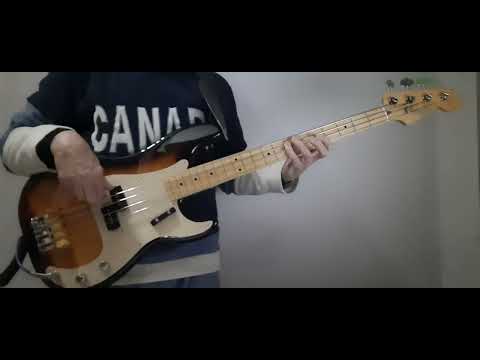