PSP Impressor, the successor to PSP MixPressor, emulates the magical classic characteristics of compressors with valve and opto-electronic circuits as well as classic modern compressors. PSP Impressor also features a highly configurable side-chain. The side-chain filter has a significant effect on PSP Impressor's sound and operation. Depending on your side-chain filter settings, the filter also lets you use the compressor as a de-esser or to reduce the pumping effects of heavy kick drums and the like.

A wide range of soft knee characteristics.
Peak or RMS level detection.
External or internal side chain signal with a smooth bell-type filter.
An output algorithm which can operate as either a brick wall limiter or soft saturation algorithm to preserve peaks above 0dBFS.
Until March 14th PSP Impressor will be offered at the special introductory price of US$69 (includes sales or VAT taxes). Starting from March 15th PSP Impressor regular price US$99 will be applied (includes sales or VAT taxes). Current users of the PSP MixPack bundle can buy PSP Impressor with an additional 70% discount. 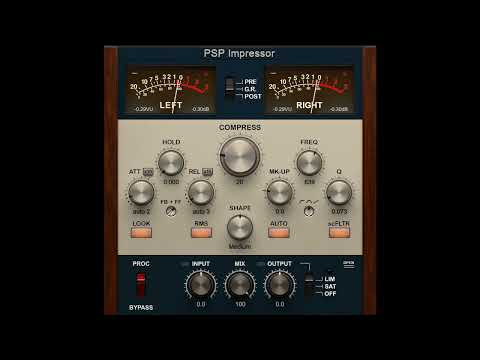