So I will put this out there first…the waiting list for the King Of Tone is something like five years. I think there is a wait for the Prince of Tone as well. Then there is the new collaboration between Analog Man and MXR, the Duke Of Tone…but that pedal in the demos I’ve heard doesn’t sound exactly like the King Of Tone. So I caved and got myself one of the clone pedals, the Demonfx King Of Drive. I consider it anyways a gateway drug purchase in terms of eventually getting some of Analog Man’s products.

So I am running a Gibson LPJ 2013 through the OD circuit of the King Of Tone clone to a Subdecay Superspring Theory (just a hint of reverb). To an AC30 CCH head with a custom 2X12 Celestion Blue cab. I have set OD on the pedal with gain at 2:30 and level at 3:00 so I am definitely hitting the amp harder than the guitar’s level signal. I am using the channel bridge switch on the amp …normal and top boost preamp levels are around 2pm and the master is quite low …I would say the amp is at lower than band rehearsal levels.

A little bit of reverb and delay in post production.

I came up with a bit of music that is slightly queen inspired…I would say in the room the tone is more Brian May than what ended up being picked up by the mic. I am only using one SM57 up close, no ambient mids…I guess I would have gotten something more representative with a room mic, but it is what it is!

More music? Look up “Hemant Rao”, “Lavender” album on Spotify, Apple Music…and most other streaming services. Or check out the links below. 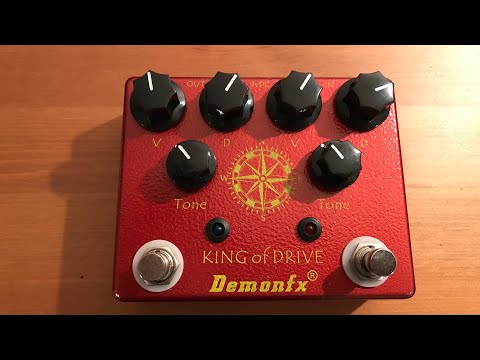 So I will put this out there first…the waiting list for the King Of Tone is something like five years. I think there is a wait for the Prince of Tone ...