In this video i tested an old school amp made by QSC Audio.i tested at 8, 4 and 2 ohms resistive load - the hardest load for amps - continous power and dynamic burst power.And i did a 16Hz power test continous , maybe thats interesting for home cinema. I use this amp for HT.
This amp is a three step class H design.This amp was rated 20-20kHz FTC 0.1% THD. Todays amp ratings are sometimes only dynamic burst power. So i decided to test the amp also in this way. The amp is almost identical to JBL MPA 1100, JBL MPX 1200 , QSC EX 4000, QSC MX 3000.There is a stronger model of the 4050 - the RMX 5050 which has also very similar circuit.The RMX 5050 has brothers from crown ( Crown XLS 5000 ) and Phonic XP 5000.
It gets clear that amp manufacturers can rate their amps in too much ways. It makes it harder to compare.

In germany the amp is only rated 650 watts per channel at 8 ohms :)


I did this test because in the past i heard many pro audio guys who switched to lightweight amps years ago and after years they still say that their older 4050 performed better on bass. Even if the newer amps had much more power on paper. 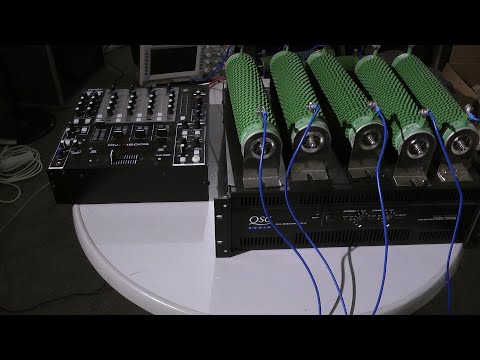 In this video i tested an old school amp made by QSC Audio.i tested at 8, 4 and 2 ohms resistive load - the hardest load for amps - continous power an...