Queen performed at Knebworth Park near Stevenage, England on August 9, 1986. This would prove to be Freddie Mercury’s final live show with Queen, and to most the LAST Queen concert EVER. The sound was reported to be incredible on this night, supposedly louder than any other concert the band had ever done. Freddie gives his all tonight, hitting some incredible notes and doing some incredible phrasing. And instrumentally, the band is rock solid performing amazing riffs, melodies, and strong improvisations. It is considered to be one of the top 10 live Queen shows, instrumentally wise, by Queenlive.ca. This show was added to the end of the tour because of high ticket demand, and Wembley Stadium wasn’t available for a third night, so Knebworth Park was chosen instead. An estimated 120,000 fans attended the show, but there are some that say the attendance reached as high as 200,000. Many things happened during the show; John threw his bass guitar into his amplifier, a woman gave birth, and unfortunately a man was stabbed to death.

What was recorded at Knebworth is heavily debated. Thus far we have no official full release of the concert. However, we know that audio wise, the band has the full show in their archives. They have released some of the songs from this show in the ‘Live Magic’ album, although overdubbed. There are also a couple of audience recordings, the best being the ‘Thank You All’ recording. Video wise the show was filmed, as there were cameras all over the stage which broadcasted video to the giant StarVision screen on top of the stage. Only half of the concert was actually recorded though, ‘Is This The World We Created?...’ to the end of the show. Queen archivist, Greg Brooks, has stated this footage is only of the big screens and some footage of the audience, which he quoted as being “utterly boring”. There is also professional footage taken by ITV and DoRo, some of which have been used in documentaries and TV segments. An audience member at the show also managed to film most of the show by recording the StarVision screen on top of the stage. It only missed parts of Crazy Little Thing Called Love and the two encore waits.

There have been many best source merges of Knebworth done in the past, but some of these were done in completely different ways than what I would like to see done. As a result I have created my own best source merge, which utilizes all professional footage and audio to their best extent. With all sources used in the correct places and best quality possible, along with better audio, better photographs, and better video! And as of uploading this video it has been 35 years since Queens final performance, and we are still hoping for an official release...

In this specific video I have gathered all available footage taken on August 9th, 1986 prior to Queen’s entrance performing on stage. I used Sikke’s footage of the band walking to the stage, but per his requests that no one reupload it, I have removed it from this post but not my original copy. As of June 2022, this should be the most definitive collection of backstage footage yet. Thank you all for the recent support! Enjoy! 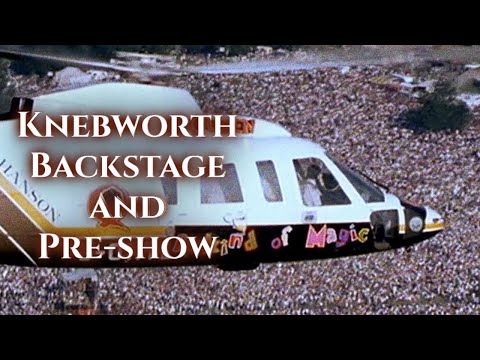