In August 1998, I was reading the latest Guitar Player Magazine and excitedly read a feature on the new guitarist for Merle Haggard's Strangers, Redd Volkaert. In the accompanying photo, he was captured holding a number of Roy Nichols-era Haggard albums, and cradling a number of vintage Telecasters, including a blackguard. In the article, Redd promoted his new "Telewacker" album and professed his love for Nichols, and I knew that this was the man that was going to bring the Telecaster sound back to the Hag's lead guitar spot. As much as I had loved the 1980s-era Roy and later Clint Strong with their Les Paul and Peavey Session 400 rigs, I had longed to hear the tunes played with a Tele and a JBL-equipped Fender amp. I soon learned that Haggard was playing nearby and I immediately bought a ticket to see Merle and the Strangers for their show on September 4th, 1998, in Corpus Christi, Texas. For the entire show, Redd was on-fire, as he paid homage to his predecessors, yet put his spin on the guitar parts to Merle's incredible catalog of hits. It was one of the best shows I have ever heard.

Today we look at Redd Volkaert and his huge influence on Telecaster players over the last 30 years. Also, we feature a new segment, Zac's book time.

1957 Fender Esquire with a 1954 neck pickup, and original bridge pickup. Restoration and aging on the body by Dan "Danocaster" Strain. Both pickups were rewound by Ron Ellis. 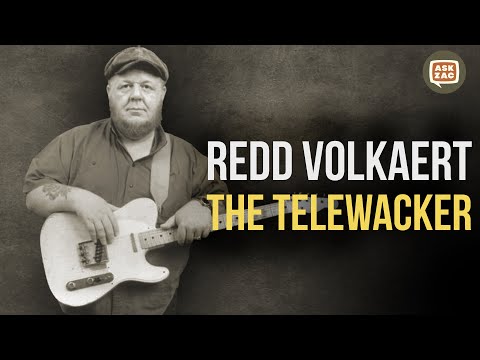