Russian soldiers crash in a foiled retreat from Kherson

Ukrainian troops are continuing their arduous advance towards the strategic southern city of Kherson, after their lightning gains in the Kharkiv region in September.

Kherson is a crucial strategic prize – the only regional capital the Russians control.

Russian officials say they have completed an operation to move civilians out of the occupied southern city of Kherson ahead of an expected battle with advancing Ukrainian forces.

At least 70,000 civilians are said to have crossed to the left (eastern) bank of the Dnipro river, in what Ukraine has called forced deportations.

Subscribe to The Telegraph with our special offer: just £1 for 3 months. Start your free trial now:
https://www.telegraph.co.uk/customer/subscribe/digitalsub/3for1/?WT.mc_id=tmgoff_pvid_conversion-subscription_editorial-iniative_03-22_EGW-13_organic_youtube

Get the latest headlines: https://www.telegraph.co.uk/

Telegraph.co.uk and YouTube.com/TelegraphTV are websites of The Telegraph, the UK's best-selling quality daily newspaper providing news and analysis on UK and world events, business, sport, lifestyle and culture.

Russian soldiers crash in a foiled retreat from Kherson 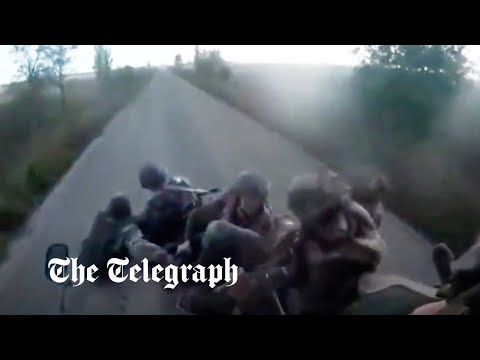