In the order issued today evening, Justice Jawad Hassan of the LHC directed Speaker Ashraf to administer the oath to Hamza by tomorrow at 11:30am.

During the hearing earlier today, Justice Jawad had asked Hamza's lawyer why his client was not filing a case of contempt of court. At this, the lawyer said, for the time being, Hamza wanted to present the matter of the oath-taking before the court.

However, he did not rule out the option of filing a contempt of court case.

The judge said LHC Chief Justice Muhammad Ameer Bhatti's orders — where he directed the governor and president separately to administer the oath to Hamza — were not being obeyed.

"This is a matter of the court's respect. No one should have the guts to challenge the high court's decisions," Justice Hassan said.

Hamza's lawyer, while presenting his arguments before the judge, said the government was violating the Constitution by not administering the oath to the chief minister-elect.

"A prime minister was punished for two minutes for violating the constitution. The then-prime minister had to leave his office after that," the lawyer said.

Following this, the court adjourned the hearing till 2pm.

After the hearing resumed, the court questioned who was being affected due to the absence of a chief minister in the province.

The CM's office has been vacant for more than a week since ex-governor Chaudhry Muhammad Sarwar — who was removed from his position in the first week of April — accepted Usman Buzdar's resignation on April 1.

The Government of Punjab's lawyer argued that a larger bench should be formed to hear the case, but Judge Hassan dismissed the plea and reserved the verdict on Hamza's plea.
Hamza's plea

Hamza filed the petition against the Federation of Pakistan and Province of Punjab was been filed under Article 199 and all other enabling provisions of the Constitution of the Islamic Republic of Pakistan and Law.

In his petition, Hamza said: “The high court had issued orders regarding the administration of the oath; however, the court’s order has not been implemented.”

He mentioned that Punjab Governor Omar Sarfaraz Cheema, once again, refused to comply with the court order, urging the court to appoint a representative who can administer the oath to him.

In his petition, Hamza has requested the court to fix a date and time for the oath-taking ceremony along with a representative.

“Actions of those causing delay in administering oath should be declared unconstitutional,” the petition maintained, recalling that the Lahore High Court had directed governor Punjab to administer oath himself or appoint a representative to perform the constitutional duty by April 28.

It, however, mentioned that governor Punjab once again refuted the verdict of the court. Moreover, President Arif Alvi also did not respect the observation of the apex court.

Terming the attitude of the president and governor as “treacherous and insulting”, the petitioner said that the high court should intervene for the fundamental rights of the citizens of the province.
Please Visit our Website for More Details - https://www.geo.tv/

Do not miss an important news update ever. Subscribe and hit the bell icon to subscribe to Geo News alerts https://bit.ly/3rDNo5j 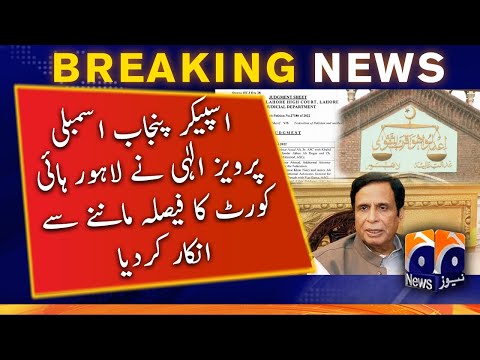