In this video I have reviewed and tested NE5532/ JRC4558 Bass mids treble bluetooth Preamplifier Volume Tone Control Board Dual AC 12V - 18V Audio Power Amplifier Board made by Inkocean.
Buy it from here:यहाँ से क्लिक करके ख़रीदे :
https://inkocean.in/products/ne5532-4558-preamplifier-volume-tone-control-finished-board-dual-ac-12v-18v-audio-power-amplifier-board?ref=bisbiqyjxem6
Tone control is a type of equalization used to make specific pitches or "frequencies" in an audio signal softer or louder. It allows a listener to adjust the tone of the sound produced by an audio system to their liking, for example to compensate for inadequate bass response of loudspeakers or earphones, tonal qualities of the room, or hearing impairment. A tone control circuit is an electronic circuit that consists of a network of filters which modify the signal before it is fed to speakers, headphones or recording devices by way of an amplifier. Tone controls are found on many sound systems: radios, portable music players, boomboxes, public address systems, and musical instrument amplifiers.
Baxandall tone control circuit
Baxandall's bass and treble control circuit, when made public in Wireless World (1952), "swept all others before it".[2] An early version of the design had already won him an award in 1950 (a $25 watch) at the British Sound Recording Association, a predecessor of the Audio Engineering Society. The design is now employed in millions of hi-fi systems (Baxandall received no royalties for his work).

It exists in several versions—Baxandall's original had two capacitors per potentiometer, but it is possible to use only one at either the treble or bass potentiometers, or both. It finds an application in hi-fi audio equipment and in amplifiers and effects for musical instruments, erroneously shown in and cited in. 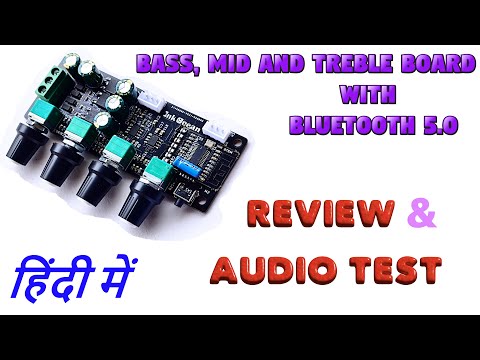